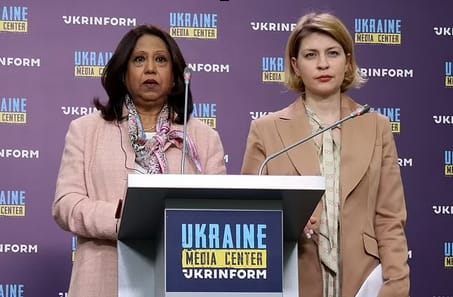 Kyiv officials have accused Russian soldiers of raping Ukrainian men and boys as well as women amid an ongoing investigation into dozens of cases.

The UN special representative on sexual violence in war, Pramila Patten, who spoke on Tuesday, May 3, warned that cases already under investigation were just ‘the tip of the iceberg.

‘I have received reports, not yet verified… about sexual violence cases against men and boys in Ukraine,’ she said during a press conference in Kyiv.

She urged all survivors of rape to come forward and report any such crimes at the hands of Russian soldiers, while acknowledging how challenging it is to do so amid fears of reprisals or of Moscow’s forces returning.

Ukraine’s prosecutor general Iryna Venediktova said on Wednesday that the first stage of investigations into Russian war crimes in the suburban town of Irpin had concluded, having spoken to 228 witnesses.

In one brutal attack, she said a woman with her 12-year-old son and husband were fired at by a Russian tank while trying to evacuate the town in their car.

UN envoy Patten said she was in Kyiv due to the growing evidence of mass sexual violence carried out by Russian soldiers during the war in Ukraine, and because of the risk human traffickers pose to vulnerable Ukrainian refugees fleeing their homes.

‘All the warning signals are flashing red in Ukraine, with allegations of brutal sexual violence emerging,’ she said at Tuesday’s press conference.

‘I could not stay back in my office in New York, in the face of such harrowing reports of sexual violence. I’m here because we must spare no effort to ensure zero tolerance and consistent consequences for these crimes.’

Apple Music names Basketmouth album as “Album of the month”