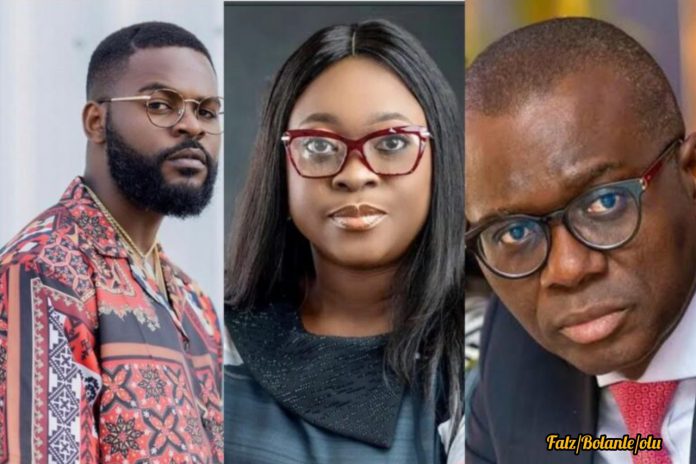 Nigerian rapper and human right activist, Folarin Falana, popularly known as Falz has written an open letter to the Governor of Lagos State, Babajide Sanwo-Olu over the death of Lagos based Lawyer, Bolanle Raheem.

It would be recalled that on Christmas day, 25th December 2022, a police officer attached to the Ajiwe Police Station in the Lekki-Ajah area of Lagos State identified as Assistant Superintendent of Police (ASP), Dambri Vandi shot and killed Bolanle Raheem.

Reacting to the killing of Bolanle, Falz took to his verified twitter page to pen an open letter to Governor, Sanwolu-Olu, demanding justice and transparency.

Falz also reminded the Governor about all that went down during the EndSars protest in the state and how youth were tagged troublemakers for demanding better governance and right treatment for law enforcement personnel.

Issuing a stern warning and an advice to the Governor, the rapper noted that there will be an open invitation to chaos if the trigger-happy police officer isn’t punished and the details of justice proceedings transparent for all to see.

He wrote: @jidesanwoolu @PoliceNG When we refused to leave the streets in October 2020, we were referred to as recalcitrant #EndSars youth that just wanted to make trouble. TWO YEARS after a panel made recommendations regarding those cases, they have still not been implemented..

Another man in police uniform took the life of a pregnant Bolanle Raheem on Christmas Day. If this person isn’t punished & all details PUBLISHED for everyone to see, I am afraid many will interpret that as an invitation to chaos. Humble advice.

“There’s something wrong with a man who doesn’t have a house...

Sina Rambo’s mother-in-law calls out Davido over alleged threats to her...