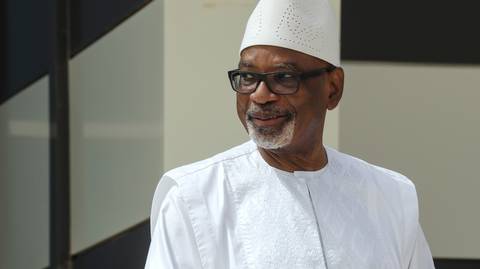 Mali’s former president, Ibrahim Boubacar Keita has died nearly 18 months after he was ousted in a military coup.

Keita’s death was announced Sunday, January 16, in Bamako, where the 76-year-old had been battling health problems in recent years.

Keita, known to Malians by his initials IBK, had been in declining health since his forced resignation in August 2020, and had sought medical treatment in Dubai, United Arab Emirates, shortly after his release from junta custody.

“The government of the Republic of Mali and the Malian people salute the memory of the late great,” the statement read, adding that funeral details would come later.

Keita won Mali’s historic 2013 presidential election held after an earlier coup in 2012 and a subsequent French-led military intervention the following year to oust Islamic extremists from power in the country’s north. But only seven years later, Keita himself was ousted by another military takeover following months of public demonstrations against his presidency.

In the 2013 election, Keita had emerged from a field of more than two dozen candidates to win Mali’s first democratic election after a 2012 coup — a landslide victory with more than 77% of the vote. He also enjoyed broad support from former colonizer France and other Western allies. In 2018, Keita was reelected to a second term after receiving 67% of the vote.

“I will remember him as a cultured man, a great patriot and a committed pan-Africanist,” tweeted Niger’s former President Mahamadou Issoufou, who led the neighboring country throughout Keita’s presidency as the two nations faced the growing regional threat posed by Islamic extremists. “I lose in him a friend and a comrade.”

Born in 1945, Keita hailed from the town of Koutiala in what is now southern Mali. He studied in Bamako, Dakar, Senegal, and Paris, earning a master’s degree in history with postgraduate studies in politics and international relations before entering politics.

His early posts included being ambassador to neighboring Ivory Coast and diplomatic adviser to President Alpha Oumar Konare, who took office in 1992. Keita then served as prime minister from 1994 to 2000, and later as president of the National Assembly from 2002 to 2007. He is survived by his wife, Aminata Maiga Keita, and their four children.