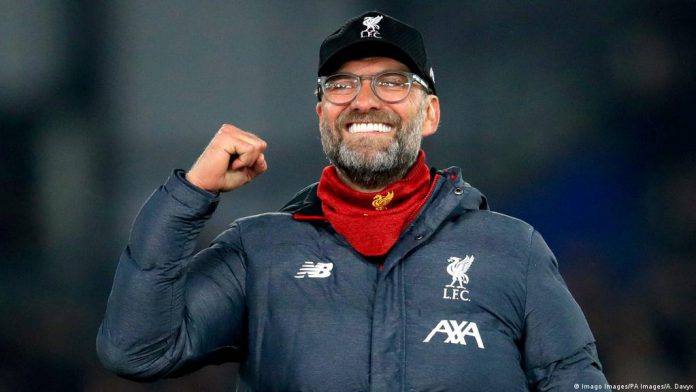 Jurgen Klopp vowed Liverpool will keep ‘chasing like mad’ after they secured a ‘massive’ victory at Aston Villa to keep alive their hopes of a quadruple.

‘Massive, outstanding, incredible mentality,’ Klopp said after his side came from behind to secure three points and go level with Manchester City at the top of the Premier League.

Steven Gerrard’s side took an early lead through Douglas Luiz before Joel Matip equalised and Sadio Mane headed home a brilliant winner with 25 minutes to go.

‘An incredible goal,’ Klopp said. ‘Sadio made the world of it. And then we had to dig deep… if my players would not be as good as they are I would talk about completely different stuff.

‘Their quality and mentality and character is the reason we are where we are. I’m not surprised they’re able to do something like this. But I don’t take it for granted. I’m really proud, it was massive.’

Liverpool captain Jordan Henderson hailed an ‘incredible’ performance and said they need not ‘waste energy’ worrying about City, who are ahead on goal difference and have a game in hand.

Klopp echoed those comments, saying: ‘We are still chasing like mad… we don’t waste energy really to think ‘hopefully they lose’. No, we just know we have to win, that didn’t change at all. Now we have to recover.’

Next up for Liverpool is Saturday’s FA Cup final against Chelsea at Wembley. ‘There’s obviously no mercy, nowhere,’ Klopp added.

Matchwinner Mane has this week been linked with a move to Bayern Munich and he was asked after the game if he has ever been happier at Anfield.

‘Yes, when we won the trophies I was happier!’ the forward said. ‘I’m just trying to enjoy every moment. It’s all about the team. The boys make it easier for me.’

One sour note for Liverpool was an injury to midfielder Fabinho, who went off after half an hour with a hamstring problem. Klopp hopes he will be fit to play at Wembley.

Villa pushed Liverpool throughout and Gerrard was ‘frustrated’ with the result.

He was particularly unhappy with referee Jonathan Moss. ‘I just hope his performance is looked at,’ Gerrard said.

11 petitioners to sabotage Ruto, Rigathi swearing in if elected