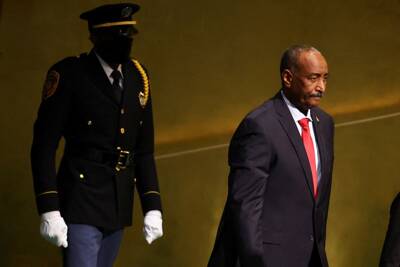 Sudan’s leader General Abdel Fattah al-Burhan issued another stern warning on Sunday to Islamists and other political factions against any interference in the military.

This is amid talks with civilian parties to form a non-partisan government.

More than a year after the military took power in a coup, the military and its former civilian partners and other political forces have begun U.N.-facilitated talks to agree on a new political framework.

However, Islamists loyal to former president Omar al-Bashir have criticised the military for seeking a partnership with pro-democracy civilian groups, and for what they say is allowing foreign interference from U.N. and western facilitators.

On Saturday thousands of Bashir loyalists held a protest against the ongoing talks. Burhan warned both civilian parties and the former ruling Islamists of agitating within the military or interfering, saying it was carrying out its own reforms.

“We’ll cut out the tongue of anyone who speaks on the military,” Burhan said in a speech at an army base west of the capital.

“We warned the Islamists, as they have started interfering with the military, we told them to stay away from the military,” he said.

Since the coup in October 2021, Sudan has been without a new prime minister or cabinet, seen increasing tribal violence, and its economy has been plunged into further turmoil. Both the military and participating parties have said they aim to pull the country out of impending chaos.

Meanwhile, Burhan had confirmed that talks had begun and on Sunday he acknowledged that the military had presented its notes on a draft constitution which the U.N. said last week was the basis of discussions it had launched.

“We expect this next government to be made up of independents not affiliated with any party, this is what we’ve always said,” Burhan stated.

The Russia-Ukraine war: A silver lining for Africa? [Article]