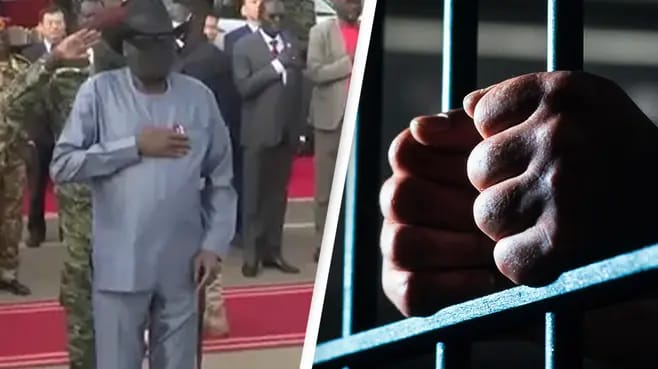 A group of reporters has been imprisoned over their suspected connection to an embarrassing video of the President of South Sudan.

It should be recalled that President Salva Kiir Mayardit had an embarrassing moment at an event on December 13 when a damp patch appeared down his trousers while the national anthem was playing.

In the leaked footage, the 71-year-old can be seen looking down, apparently only just noticing the fresh damp patch.

The union says they all work at the state-run South Sudan Broadcasting Corporation.

UJOSS President Patrick Oyet said the news team ‘is suspected of having knowledge on how the video of the president urinating himself came out’.

He added: “We are concerned because those who are detained now have stayed longer than what the law says.

As per the law in South Sudan, authorities can only detain suspects for 24 hours before they must appear before a judge.

Sub-Saharan Africa representative for the Committee to Protect Journalists Muthoki Mumo added that the arrests are unsurprising and match ‘a pattern of security personnel resorting to arbitrary detention whenever officials deem coverage unfavourable’.

Since the news of the arrests broke, government officials have copped a roasting on social media over their attempt to curb press freedom.

One Twitter user said: “And South Sudan was ranked higher than India in the Press Freedom Index.”

Pay our Tier-2 pension by February or face our wrath –...