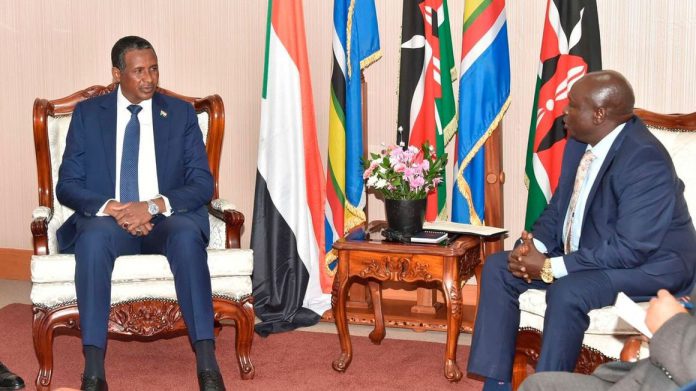 Sudan has initiated the process of lobbying for the revocation of its suspension by the African Union (AU) in what seems to be a strategic move to strengthen its role in the IGAD leadership.

This is after Sudan’s deputy leader Mohamed Hamdan Dagalo visited Nairobi, Kenya, to solicit support for regaining the membership the country lost in 2021 following a military takeover.

Sudan has been seeking readmission into the African Union (AU) after it was suspended following a coup led by General Abdel Fattah al-Burhan, who ousted the transitional government of former Prime Minister Abdalla Hamdok on October 25, 2021.

“The most important matter in this visit is economic cooperation. There are big economic dimensions in this visit, The first is trade between Sudan and Kenya, which is considered the gateway to East and Central Africa. Sudan does not have a large commercial presence in these areas, but now through Kenya, Khartoum can access them, especially if the shipping line between Port Sudan and Khartoum is expanded. “This provides a big service, especially with the development of Kenya’s infrastructure connectivity,” said Abdel Wahab Gumaa, a Sudanese economic analyst explained.

Sudan and Kenya are also main guarantors of the Revitalised Peace Agreement signed in Addis Ababa, Ethiopia, to end five years of civil war in South Sudan, which started in 2013.