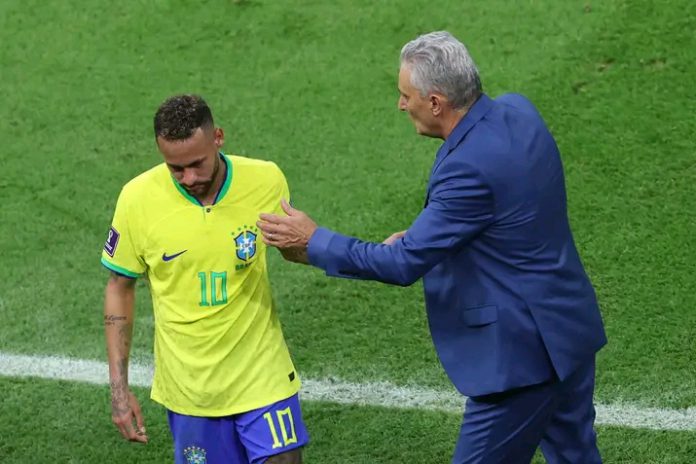 Neymar has written a long open letter to Tite after Brazil’s exit from the World Cup.

The South American giants were kicked out of the tournament at the quarter-final stage by Croatia, and Tite left his post as Brazil coach after the conclusion of the match having been in charge of the national team since 2016.

PSG star Neymar has raised questions about his own continued involvement with the Brazil national side – despite tying one of Pele’s many international records with his goal against Croatia.

On Instagram, the 30-year-old revealed his first impressions of Tite were not positive ones – because they were always in the midst of domestic rivalries.

‘Before we met in person, we played against each other many times and I thought you were very annoying! Because you put together a team to mark me, you did everything to beat me,’ Neymar revealed.

However, he quickly grew to appreciate Tite once they were on the same side. He wrote: ‘I knew you as a coach and knew that you were very good, but as a person you are great! You know who I am and that’s what matters to me.

‘I want to thank you openly for everything, all the teachings that you have given us – there were so many. You will always be one of the best coaches I’ve ever had or will ever have.’

He said Tite and the Brazil squad ‘deserved to triumph’ in Qatar, adding ‘we all deserved it for everything we did and for everything we gave trying to achieve our biggest dream. But God didn’t want it that way.’

Brazil exited the tournament after three wins, two in the group stage, and a 4-1 win in the last-16 against South Korea, when Tite joined in with dancing celebrations as they showed their dominance in an impressive first half display.