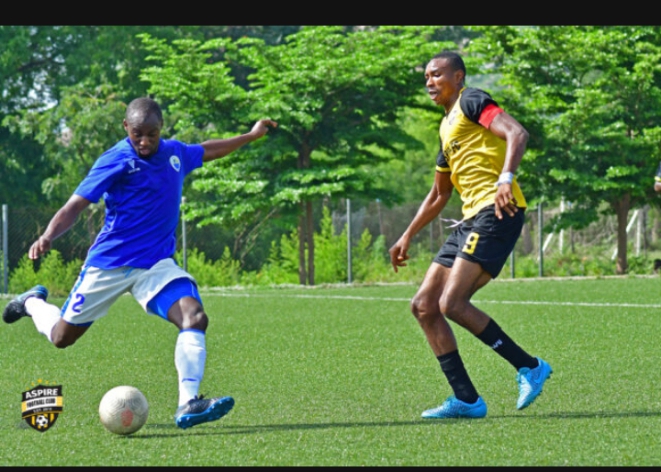 Aspire Football club of Anambra on Sunday at the FIFA Goal project, MKO Abiola stadium, Abuja bowed to the superior firepower of NPFL side , Yobe Desert Stars in a 2021 Aiteo cup round of 64 game.

In an explosive encounter, the Champions from Anambra state showed a glimpse of what they were made of when Okezia Umenwa gave the fans something to cheer about with a 35-yard screamer in the 20th minute to level scores after Yobe Deserts stars have taken the lead in the 16th minute of the game through Obinna Ukwu.

Both team went into the break all squared.

The second half began on an even explosive note with the lads from Anambra asking all the questions.

However, it was Yobe Stars who went ahead again in the contest thanks to a sublime finish by Jonathan Jacob in the 53rd minute.

Dauda Martins of Yobe Deserts Stars put the icing on the cake to take the game away from Aspire Fc with another goal in the 71st minute to make the encounter 1-3.

Aspire Fc fought hard to come back with the attacking duo of John Bassey and Okezia Aguero Umenwa troubling the Yobe Stars but the more experienced team from Damaturu stood their ground.

The victory takes Yobe Stars to the round of 32 of AITEO Cup where the team will play Lobi Stars of Makurdi.

Meanwhile in another centre, 3SC football club of Ibadan mauled Technobat of Jalingo 8-0 at the Bako Kontagora Stadium, Minna with Gafar Olafimihan scoring four of the goals.

Shooting Stars will face Gombe United in the next stage of the competition, with the encounter slated to hold in Lokoja.

Load shedding is back, Eskom implements stage 2 power cuts from...

Leboeuf urges Ronaldo to retire: I don’t want to have pity...

Two Reasons Why Adeleye Is Tipped To Shine In Israeli League...