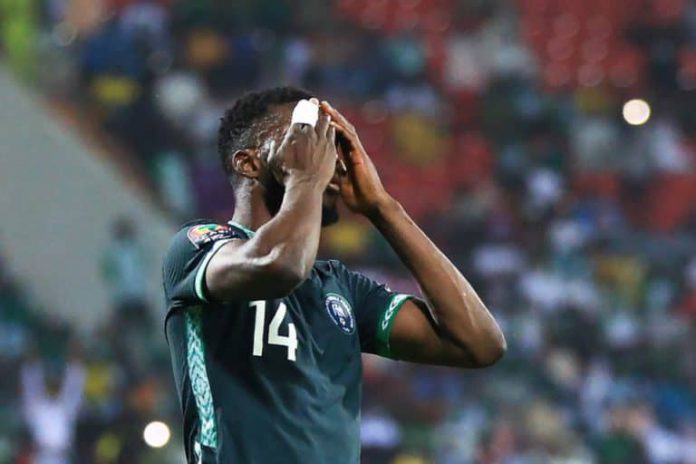 Nigeria played a crucial 0-0 away draw against Ghana in the first leg 2022 World Cup playoff against Ghana’s Black Stars in Kumasi but walks a tight rope given the away goals rule which is still in force in the FIFA World Cup Playoffs.

Ghana and Nigeria’s World Cup hopes remain in the balance after a tight first leg finished goalless in their playoff tie.
There was little in the way of clear-cut chances across the 90 minutes in Kumasi, with Moses Simon having the best chance as he was denied in the second-half.

The Super Eagles thought they had a penalty in the closing stages but it was overturned after a VAR review, and it means it’s all to play for heading into the second leg in Nigeria on Tuesday night when a place in Qatar at the end of the year will be won.

It was Ghana who started the match the better of the two sides, roared on by a raucous home crowd, though it wasn’t until 30 minutes in that their first real chance of the match came. Abdul Fatawu let fly with a powerful strike from the edge of the box, which Francis Uzoho parried away.

Nigeria grew into the game and enjoyed a bright spell just before the break. Kelechi Iheanacho very nearly got on the end of a cross at the back post, before Victor Osimhen sent a tame volley at goal that was comfortably saved.

The Super Eagles had a massive chance to take the lead just after the break, when Moses Simon found himself clean through on goal. His shot from ten-yards out was saved though, as Jojo Wollacott kept the Super Eagles out.

Ghana threatened themselves and Jordan Ayew had a decent shot saved with 20 minutes remaining. From the resulting corner, Felix Afena-Gyan should really have sorted his feet out to have a tap-in at the back post but he couldn’t react in time.

Ademola Lookman was introduced for his Nigeria debut, after he was called up for the first time since his switch to represent the Super Eagles. His new side thought they had a penalty with just over ten minutes to go as Baba Mohammed was penalised for a handball in the box.

However, after a VAR review it was deemed that the Ghana man had been fouled before he handled, and the referee returned from consulting the monitor to overturn his original decision.

There was to be no further drama in the final minutes as it finished goalless, which was probably a fair result, and sets up a second-leg showdown for a place at the 2022 World Cup.