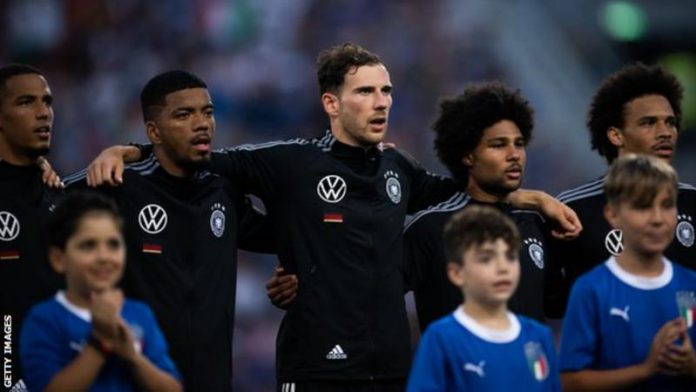 Germany midfielder Leon Goretzka has criticised the comments made by a Qatar World Cup ambassador about homosexuality saying they are “from a different millennium”.

He also said the LGBTQ+ people going to Qatar should “accept our rules”.

Homosexuality is illegal in the World Cup host nation as it is considered immoral under Islamic Sharia law.

At Bayern Munich’s victory on Tuesday night, a banner was unveiled in protest against Salman’s comments.

Speaking after the game, Bayern’s Goretzka told German media: “It’s very oppressive. This is an image of a man that comes from another millennium.

“It leaves you speechless that something like this can be said by a World Cup ambassador shortly before a World Cup.”

“I am not a strict Muslim but why is it haram? Because it is damage in the mind,” he said before the interview was stopped by an accompanying official.

“Fifa should seriously examine whether its ethics committee should deal with this.”

Neuendorf also said he had spoken to former Aston Villa and Germany midfielder Thomas Hitzlsperger, 40, who revealed he is gay in 2014.

“I spoke to Thomas Hitzlsperger on the phone today about this matter,” he added. “We are unanimous in our assessment: the World Cup ambassador’s lapse is completely out of the question and leaves us stunned.”

Donations made towards national drought mitigation stand at Sh542mn as at...