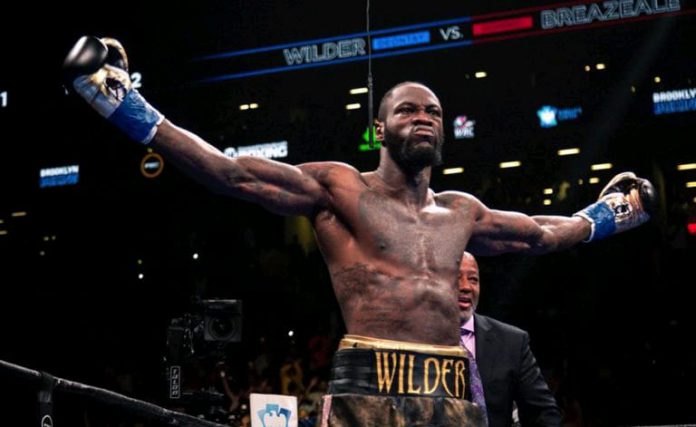 Deontay Wilder intentionally avoided an offer to fight Anthony Joshua in order to concentrate on his upcoming fight against Robert Helenius.

Wilder, 36, returns for the first time since his consecutive knockout losses to Tyson Fury when he fights former sparring partner Helenius on October 15. ‘The Bronze Bomber’ considered retiring from boxing after losing twice to Fury, but insisted his “job is not done” in the heavyweight division as he looks to become a two-time champion.

Before Joshua lost to Oleksandr Usyk in their rematch last month, Matchroom Boxing boss Eddie Hearn said he reached out to Wilder’s manager Shelly Finkel about a potential fight between the two heavy hitters. Hearn was confused as Finkel never replied to his offer, but the manager has now cleared the air regarding the situation.

“It’s come out a few times by Eddie Hearn that I avoided him,” he told talkSPORT. “That’s partially true, well it’s wholly true. We have a fight coming up with Robert Helenius. Eddie emailed me, ‘Can we talk? I have some big [offer] for Deontay. Right now we have the Helenius fight, that’s all we need to concentrate on. Because if something went wrong there, nothing else would be. And if it goes right, it’ll all get worked out.

“I felt if I got on a call with Eddie, the next thing you would be on the call to me, ‘Oh, did you and Eddie talk?’ So I said to Deontay and Al Haymon, ‘What do you think?’ and they said, ‘Let’s just get this fight out of the way.’ Sure enough, [Hearn said], ‘Shelly didn’t even talk to me.’ I think he also has this feeling that I dislike Eddie.”

Finkel added that he doesn’t always see eye to eye with Hearn, but has respect for what the promoter has achieved in the sport. With Fury now in talks to fight Joshua in a highly-anticipated domestic clash, Finkel said Wilder would be open to fights against Usyk or Andy Ruiz Jr instead of Joshua.

“The other day we got a message that Usyk will fight us if Joshua goes the route of Fury, yeah, we’re open to that, we’re not opposed to that at all,” he added. “If not, there’s Andy Ruiz Jr, there’s several other options. In my mind, until the Fury [vs Joshua] thing came, I was thinking that after the fight with Helenius we would be talking, Eddie and I, but things happen.”