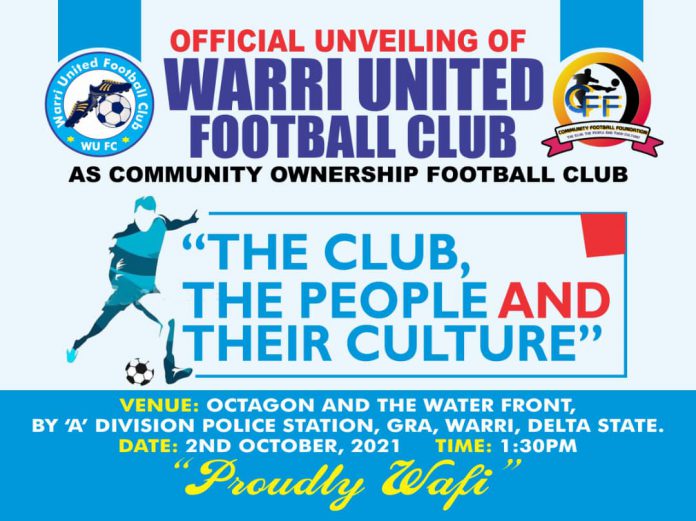 The Board of Directors of a newly registered Community football Initiative club known as WARRI UNITED FOOTBALL CLUB will be unveiled to the press and public tomorrow in the Oil city of Warri.

According to the Director IT MARKETING AND MEDIA of the club Pastor (Comrade) Aloysius Okerieke, the club which was registered last month by the corporate affairs Commission is set for launch any moment after the unveiling of the cub. The veteran Journalist and Sportswriter cum Youth football developer hinted that the crop of players that will form the nucleus of the team will be drawn from age 17-19 years bracket which is a good age bracket for modern football. Though the team will in future have other age bracket teams from between age 13 -16 players as well as other sports like athletics e.t.c.

Furthermore he said ” This is a good development and one of the best thing to happen to football in this part of the country. The concept of diversifying from government funding of clubs and allowing the communities to own and manage their own clubs under the CFF arrangement is a new dimension that is being introduced to this part of the world and we will utilise this great opportunity to maximize the profits that will acrue from it through the various talents that will be discovered harnesses and nurtured for future gains for the community. Looking at the caliber of men who will direct the affairs of the club, you will agree with me that they are all football technocrats.

The club is purely a community based concept where our monarchs and individuals are co owners of of the club and will debut in the Nigerian league soon after launch.

Screening excercise is slated sometimes this month in a venue to be announced later. Other clubs that are already launched and are in the CFF concept includes Badagry United Fc. e.t.c.