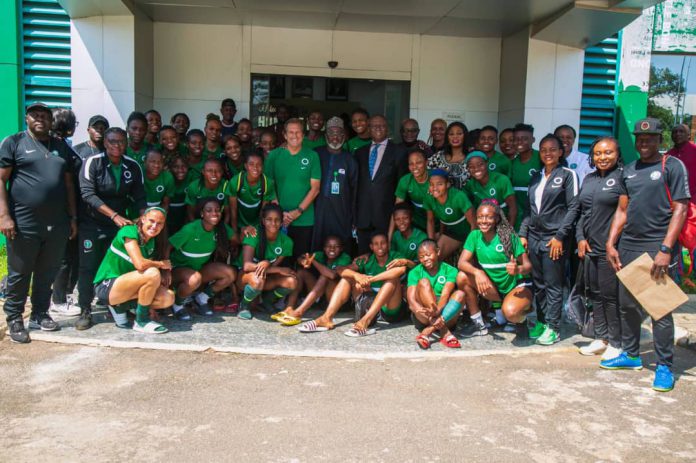 Head Coach Randy Waldrum has commended the Nigeria Football Federation for its continued total support for the country’s Senior Women National Team as the Super Falcons were set to round off a 9-day training camp in the Federal Capital, Abuja. The training camp that commenced on Monday last week would come to an end on Tuesday.

“I am very delighted with the support the Federation has always given to the team; this has helped our work. I am happy we had this training camp as we were able to see the home-based players and the overseas-based, and everyone bonded very well. It has been a marvelous experience and the joy among the players is palpable.

“We will look to have periodic campings like this in order to be able to put forward the best of Nigeria women players for matches and championships at any time.”

General Secretary of the NFF, Dr Mohammed Sanusi, who received the players and their officials at the NFF Secretariat, said the football –governing body will always ensure to provide the Falcons with the best conditions to train and play friendly and competitive matches, in order to do the nation proud each time.

“We will set aside resources to organize more of this type of camping so that we will always get the best from home and abroad and blend them to perform at optimal level when the need arises. We are aware of the challenge that Cote d’Ivoire will pose when we confront them for a place at next year’s Women AFCON. We need players who are committed and are proud to dorn the country’s colours and will strive to deliver no matter the circumstances.

“Football is the strongest unifying force in our country, as you can all attest given the diversity in your camp. We have players who are home –based, some overseas –based and some that are visiting the country of their birth for the first time! I believe it is a very interesting and pleasurable experience for those who are in the country for the first time ever.”

Veteran defender Onome Ebi, who spoke on behalf of the players, said the pain of being eliminated from the qualifying series for the Tokyo Olympics by the Ivorians is yet to fully subside. “I can tell you that we still nurse the pain of missing out of the Tokyo Olympics as a result of the loss to Cote d’Ivoire in the qualifying series. This time, we will repay them in their own coins. Personally, I want to play in the Africa Cup of Nations and the FIFA World Cup, and I know it is the same for my team mates.”

Injured forward Desire Oparanozie, of Dijon FC of France was replaced by Sweden –based Anam Imo at the training camp. This year, the Super Falcons have played at the Turkish Women’s Cup in Antalya, participated at the USWNT Summer Series in the USA, had a training camp in Austria and played at the 1st Aisha Buhari Invitational Tournament.

The Super Falcons will confront the Ivorians in a home-and-away final elimination fixture for the 12th Women AFCON slated for Morocco in the summer of next year. Both legs of the fixture will take place in the month of February. It is at the Women AFCON in Morocco that Africa’s flagbearers at the 2023 FIFA Women’s World Cup finals in Australia and New Zealand will emerge.