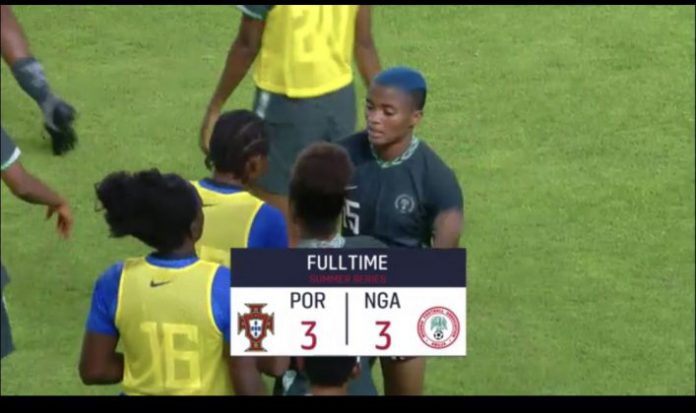 Having lost the first match 0-1 to
Jamaica and played a draw with Portugal means the Waldrum tutored side have only one points in two matches in the Summer Series in the United States of America.

Super Falcons, ranked 38th in the latest FIFA rankings came from 3-1 to claim one point against 29th ranked Portugal in their second game at the Summer Series.

Missing several key players who were held back by either delayed
issuance of entry visa or injuries, the Super Falcons lost 0-1 to the
Jamaicans on Thursday at the BBVA Stadium in Houston – the same venue where they confront the Portuguese on on Monday morning

An own goal in the 21st minute of the game by Chidinma Okeke gave Portugal the lead before Carole Costa double the advantage in the 34th minute. Michelle Alozie reduced the tally to 2-1 with one minute to the end of the first half.

In the second half, Portugal scored again to increase the lead to 3-1 before Ajibade finds Oshoala who slots home from close range, closing the gap of the goal tally. The former Robo Queens striker, Ajibade after her assist scored in the 90th minute to earn Nigeria a point.

Team USA who have beaten the Super Falcons in every encounter at the FIFA World Cup and the Olympics will be their next opponwnts. But Wednesday’s tie will be the first friendly match involving both teams. In fact, the Americans have only ever played friendly matches against only one African team previously
– South Africa’s Banyana Banyana.