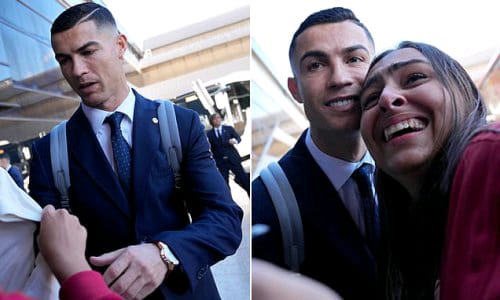 Cristiano Ronaldo is all smiles as he jets off from Lisbon to Qatar ahead of the 2022 World Cup, despite being on the verge of being sacked by Manchester United.

The superstar forward is set to appear in his fifth World Cup for Portugal as they finally headed off to the major tournament albeit slightly later than most of the other nations.

The 37-year-old was captured smiling, posing for pictures, and signing autographs for fans as they waved the Portugal squad off from Lisbon airport.

The former Real Madrid star cut a relaxed figure that is purely focused on helping his nation at the winter tournament, rather than worry about his future at Old Trafford.