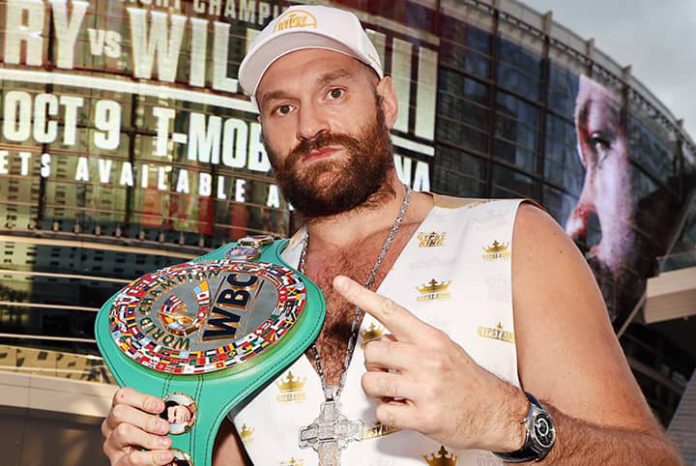 Tyson Fury would be wiling to give up his world heavyweight title if a deal can’t be made for him to defend the belt against Dillian Whyte.

Fury is eager to remain active after being kept out of the ring for close to two years by the coronavirus pandemic and contractual issues that caused his trilogy with Deontay Wilder to be delayed for months.

And his promoter Bob Arum has insisted that he will be fighting by the end of February or start of March, regardless of whether or not Whyte is the opponent.

But with Fury’s fellow Brit now the official mandatory challenger for the Gypsy King’s WBC belt, deciding to take on another opponent would mean he would be stripped of the title.

Talks are ongoing for a UK homecoming to take place at the Principality Stadium in Cardiff in March, with issues arising around the purse split.

“If we can’t come to a deal with Dillian Whyte, we’ll do a fight for the Ring Magazine belt and the ‘lineal’ title and we’ll pick another opponent,” Arum told TalkSPORT.

“We’ve got to get Tyson back in the ring by the end of March – Frank [Warren] and I are determined to come to him with an opponent that’s acceptable and we’d love to do that fight in Cardiff.”

And they are eyeing up potential opponents for that bout, which would be Fury’s first in his homeland since 2018, with former world champions Andy Ruiz and Joseph Parker listed as possibilities.

Parker defeated Derek Chisora in a war of attrition at the AO Arena in Manchester last night, while Ruiz, who beat Anthony Joshua for the world titles in 2019, has been nursing an injury after returning against Chris Arreola.

“Andy Ruiz Jr is a possibility,” Arum teased. “Joseph Parker I see had a good victory over Derek Chisora – that could be a possibility.
“And we’re looking at a couple of other names that might be appropriate.”
Fury and Whyte have known each other for a number of years, and a fight between the two is still the favoured option.

It had been reported during the week that the pair wouldn’t have a rematch clause, which Anthony Joshua did insist upon when he fought Oleksandr Usyk last year.

There had been brief efforts to organise a step aside deal for Joshua to allow Usyk to face Fury, but it wasn’t a feasible option given a number of contractual obligations.

Fury has a mandatory challenger in Whyte, so it would be impossible to guarantee Joshua the next shot at the undisputed title.
Joshua is expected to rematch Usyk in the early part of next year, with the winners of both bouts finally able to fight for the undisputed title.

Fury and Joshua had seemed set to finally unify the division with an August fight date, but when Wilder won an arbitration case Fury was forced to give him a trilogy.

But with no rematch clause in place for the Whyte bout, and Usyk and Joshua set for a final meeting, there would be no obligations in the way of finally crowning an undisputed heavyweight champion.

Fury holds the WBC belt, while Usyk is the unified WBA, WBO and IBF world champion, as well as laying claim to the less prestigious IBO belt.