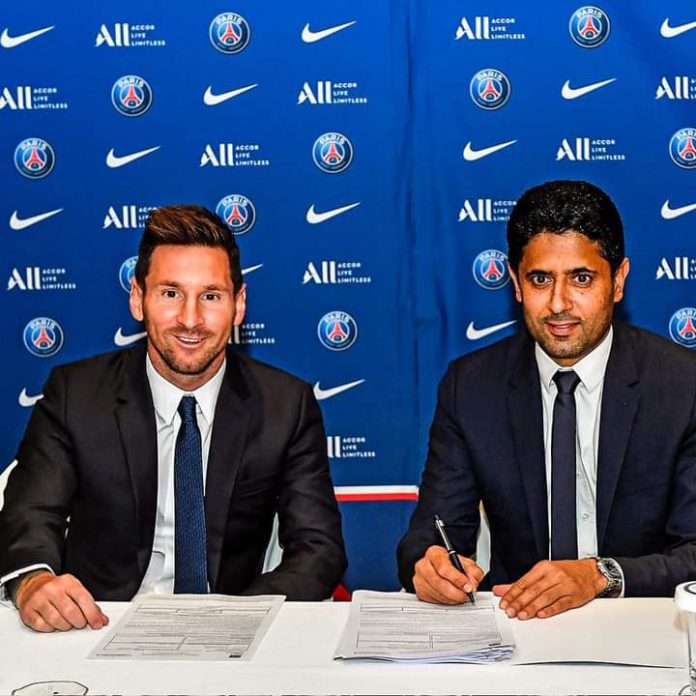 The Argentine forward who is arguably the best player of all time penned a two-year deal with an option to extend for one more year with the French giants on Tuesday.

Messi prior to the signing had played all his life for Barcelona and would’ve loved to continue with the La Liga side but the new rules guiding the league prevented Barcelona from signing him on a new five years deal, despite his willingness to take a 50% pay-cut.

Speaking after signing for the Parisiens, Lionel Messi said: “I am excited to begin a new chapter of my career at Paris Saint-Germain.

“Everything about the club matches my football ambitions. I know how talented the squad and the coaching staff are here.

“I am determined to help build something special for the club and the fans, and I am looking forward to stepping out onto the pitch at the Parc des Princes.”

Nasser Al-Khelaifi, Chairman and CEO of Paris Saint-Germain who is known for pulling big deals having recently signed Sergio Ramos, Georginio Wijnaldum, Gianluigi Donnarumma for free, with Achraf Hakimi the only big name player his paid for this summer (€68million) said during Messi’s unveiling:

“I am delighted that Lionel Messi has chosen to join Paris Saint-Germain and we are proud to welcome him and his family to Paris.

“He has made no secret of his desire to continue competing at the very highest level and winning trophies, and naturally our ambition as a club is to do the same.

“The addition of Leo to our world class squad continues a very strategic and successful transfer window for the club.

“Led by our outstanding coach and his staff, I look forward to the team making history together for our fans all around the world.”

Messi contracts runs till 2023 but has an option to extend for a further year after it expired.

International Friendly: Nigerians Should Expect My Best Like I Always Give...

Athletics: Ofili, Others Shine Again In US Meet