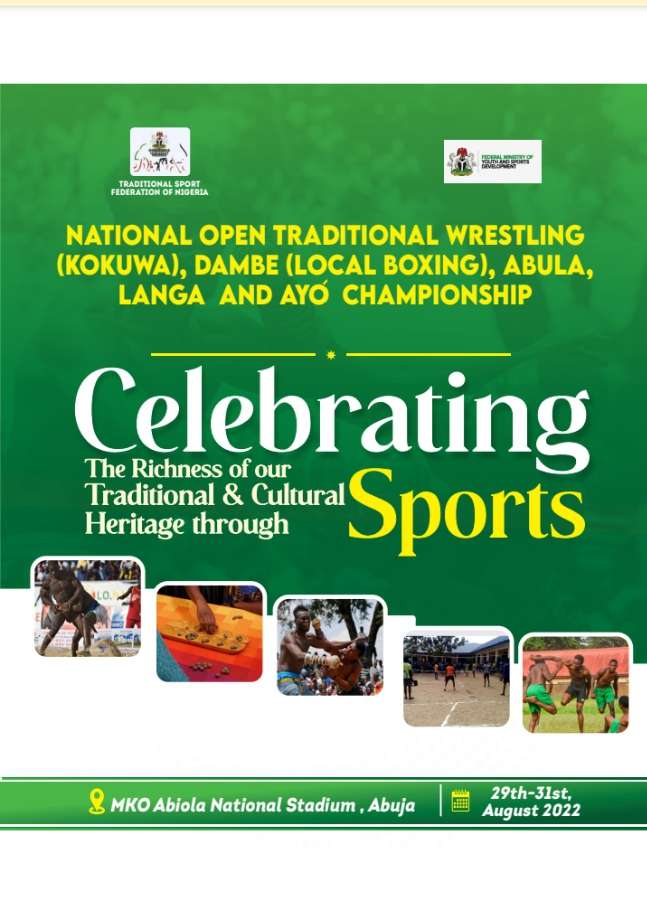 Traditional Sports Federation of Nigeria has confirmed that about 15 states and some clubs are set to take part in the 2022 edition of Traditional Wrestling known as Kokowa, Dambe, Abula, Langa and Ayo Championship that is billed to take place in Abuja.

The championship that is scheduled to take place at the Package A of the Moshood Abiola National Stadium Abuja from August 29 to 31 was organized to position traditional sports as a prominent national sport in the country.

Speaking during an interview in Abuja, President of the Traditional Sports Federation of Nigeria, Honourable Olomo Agbadabina said preparation is in top gear to host a hitch free championship.

“It is the national championship of the five sports under the traditional sports federation namely; Kokowa, Dambe, Ago, Abula and Langa”.

“Preparation is in top gear, the arena for the five different sports are in order, we are fully ready to host a hitch free competition”.

Traditional sports is popular but not competitive in the country and however, honourable Olomo Agbadabina assured that he will do all within his power to create more awareness that will promote the development of the sports in Nigeria.

“This is the first time we are organizing a national championship apart from the national sports festival and we are doing this program to create more awareness capable of promoting the development of the sports in the country because all the 36 state will key into the program once this edition is concluded”.

The president further commended the sports ministry for their support in making sure that the competition holds.

“We as a federation we are happy with the support extended to us by the sports ministry and we believe it will go a long way in the successful hosting of the program “.

Our correspondent reports that the 3-day championship is expected to kick off today Monday August 29 and ends on Wednesday August 31 in Abuja.