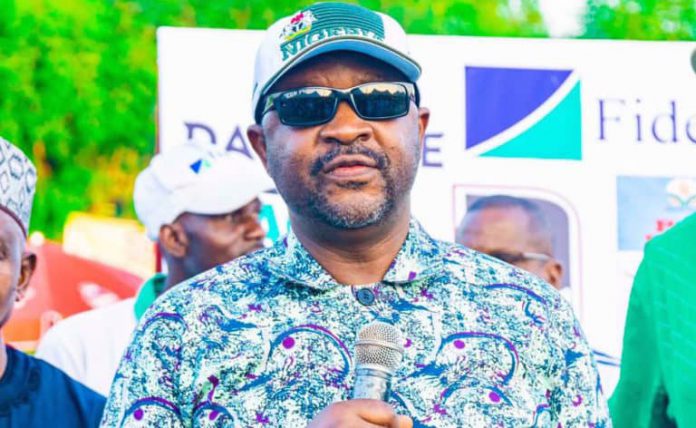 He said; “The names I saw in the LOC set up by Delta State are familiar names. The task is upon you. Warri no dey carry last. We saw the standard at Edo 2020; Asaba 2022 must surpass that standard. I don’t have any doubt in my mind that Delta State government will give us the best Games in 2022,” he stated.

The Sports Minister praised Governor Ifeanyi Okowa, particularly the steps he has taken in repositioning sports. “His adoption of 12 Nigerian athletes, the biggest in the Adopt-an-athlete initiative ahead the Tokyo Olympics Games played a huge role. I am happy one of the athletes, Ese Brume got a medal. I am proud of what Okowa has done for sports.”

Dare also thanked President Muhammadu Buhari for creating the environment for new and progressive ideas to thrive in sports ecosystem, revealing that the NDP 2021-2024 allocated N88billion to sports development for the first time, with youth development also got an allocation of N60billion.

Delta State Governor, Ifeanyi Okowa has assured that Asaba 2022 National Sports festival will be the best ever. He revealed that he was motivated to bid for the hosting of National Sports festival following what he described as enthusiasm displayed by the Sports Minister, Sunday Dare. “I was almost discouraged from biding to host the sports festival because of what was happening in Nigerian sports then but I can see the enthusiasm Sunday Dare has put in since he came.

“Asaba 2022 will be the best in terms of infrastructure and others that will be in place in the next few months. We have the personal to stage a fun-filled and friendly sports festival from the beginning to the end,” Okowa stated.

Chairman of the LOC, Secretary to Delta State Government, Chief Patrick Ukah, says they will host a bigger, better and athletes-based sports festival.

Meanwhile, the Chairman of Delta State Sports Commission and co-chairman of Asaba 2022 National Sports Festival, Chief Tonobok Okowa has revealed that the state had embarked on construction of new infrastructure, including the Games Village ahead the sports festival.

After consultation with all stakeholders yesterday, both the LOC and the sports ministry agreed that arrival for Asaba 2022 sports festival is November 2nd and 3rd, opening ceremony Nov 4, closing ceremony Nov 13, departure Nov 14, while the Games village will be closed on Nov 15, 2022.

The Memorandum of Understanding (MOU) between the Federal Ministry of Youths and Sports Development and Delta state government for the hosting of Asaba 2022 was signed by the Sports Minister, Sunday Dare and Governor Ifeanyi Okowa at the Unity Hall, Government House, Asaba, on