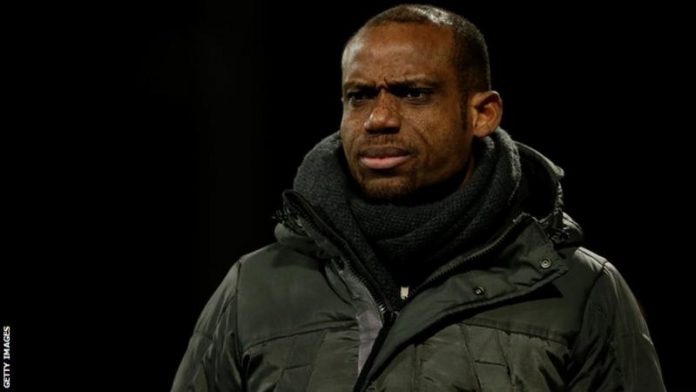 Former Nigeria captain Sunday Oliseh is keen to further his managerial career and with a Belgian club his ideal choice but he has not ‘completely’ ruled out a move abroad.

The 46-year-old has been without a job since leaving Dutch club Fortuna Sittard in February 2018.

Five years after he stood down as coach of Nigeria the former Ajax and Juventus midfielder is prioritising Belgium for personal reasons.

“The desire to work in Belgium is a personal one because I would love to be close to my family,” Oliseh said

“Being around my family is a top priority, but professionally if something does come up abroad it would be something that I would consider.

“A consideration with a club abroad that permits for conversation about splitting time between Belgium and my work base is quite welcome.”

The 1994 Africa Cup of Nations winner began his career at Julius Berger in his native Nigeria before European spells at Belgian club RFC Liege, Italian side Reggiana and FC Koln of Germany.

Oliseh, who helped Nigeria win Olympic football gold in 1996, played for Dutch giants Ajax from 1997 to 1999, picking up a Dutch Eredivisie and two Dutch Cup titles.

A member of the ‘golden generation’ of Nigerian football stars – alongside Jay-Jay Okocha, Nwankwo Kanu, Daniel Amokachi and Finidi George – Oliseh has released a fast-selling book ‘Audacity to Refuse’ detailing challenges, untold stories and tough decisions he had to make.

Oliseh, who also played for Juventus, Borussia Dortmund, VFL Bochum and Genk during his club career, earned 63 caps for Nigeria.

He played for his country in two Nations Cup and World Cup tournaments before his exit from international football in 2002.

In July 2015, he became the fourth player from the class of 1994 to manage the Super Eagles after Austin Eguavoen, Samson Siasia and Stephen Keshi

“I have never met my father” – Actress, Susan Pwajok makes...