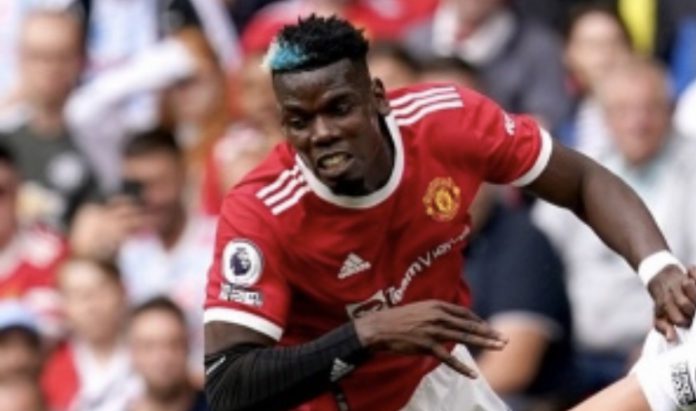 Paul Scholes has criticised Paul Pogba for being ‘away with the fairies’ during Manchester United’s 2-2 draw with Atalanta on Tuesday evening.

The French international struggled to perform during Manchester United’s fixture in Italy and was ultimately hooked off for Nemanja Matic in the second half.

Reflecting on Pogba’s performance, Scholes said the Manchester United midfielder would need to be babysat ‘until he is 35’ as he has the tendency to do ‘stupid stuff’ on the pitch.

Speaking after the game, Scholes said: ‘Pogba needs somebody on him all the time. Somebody there that he totally respects, he needs experienced people behind him.

‘How old he? 28? He’s a really experienced player. But he’s one of them that will get to 35 and be exactly the same.

‘He’ll still be doing the stupid stuff where he’s stud rolling the ball, holding people off showing how strong and skilful he is.

‘The biggest thing with Paul is his concentration. He goes away with the fairies at times.

‘You think of the Juventus team he played in, where he was brilliant and was why we signed him.

‘The experience around him – [Andrea] Pirlo, [Giorgi] Chiellini, [Leonardo] Bonucci, [Gianluigi] Buffon, an aggressive manager. He will need that treatment until he’s 35.’

Rio Ferdinand added his thoughts on Pogba, claiming the midfielder had failed to live up to expectations in a Manchester United shirt.

He said that the French man does not look as stimulated for the Red Devils as he does for his country.

Ferdinand said: ‘Paul [Pogba] would agree that he hasn’t delivered to the level he would expect of himself in a Manchester United shirt.

‘He is not getting the international jolt he gets with France. Maybe he needs that fear of not playing if he isn’t performing.’

Ferdinand went on to agree with Scholes by saying Pogba needs to be pushed by his team-mates. He also said that he felt the responsibility should fall onto the shoulders of Cristiano Ronaldo.

Ferdinand told Scholes: ‘I can’t think of anyone else other than Cristiano that would get a hold of Paul and going “I’ll be on to you half time.”

‘Maybe it’s a generational thing, maybe it’s different now. In our changing room these conversations would be going on.’

Scholes and Ferdinand’s comments came not only after he was hooked off against Atalanta but after he was shown a red card against Liverpool.

The Frenchman was sent off in the 60th minute of the game after he lunged into a two-footed tackle on Naby Keita with his side 5-0 down at Old Trafford.

Pogba was initially booked but, after a VAR check, Taylor sent him off on the hour mark.

Sportsmail previously revealed that Pogba had apologised to his team-mates for his red card at Old Trafford, though did not say anything to Solskjaer after the loss.

Speaking of the red card at the time, Scholes told Premier League Productions: ‘Paul Pogba coming on to the pitch at half-time to try and help the team and maybe get a little respectability about it, tries to stand on the ball, tries to show how strong he is in the middle of the pitch… gives the goal away.

‘Then later on gets sent off with a ridiculous tackle. Now you’re 5-0 down with 10 men. You’d have to think, if Ole’s still a manager there, will we see Pogba again in a United shirt?

‘He’s caused mayhem over the last couple of years. Everyone knows what a talent he is, everybody trusts him, every manager trusts him, tried to give him his head and let him be the player he’s been.

‘But with all the commotion, not signing his contract, almost holding the club to ransom, and then he comes on and does something like that.

‘It’s not Ole’s fault, don’t get me wrong, but that’s part of it which almost summed the United performance up today.

‘Look, he probably will play [again] won’t he? But I don’t think they will be missing anything if he doesn’t.

‘He’s had numerous chances, he keeps saying he lacks consistency, but that is just [a lack of] discipline and disrespect for your manager and your team-mates, what he’s done today.’

Rashford Reveals Why He Hates Liverpool