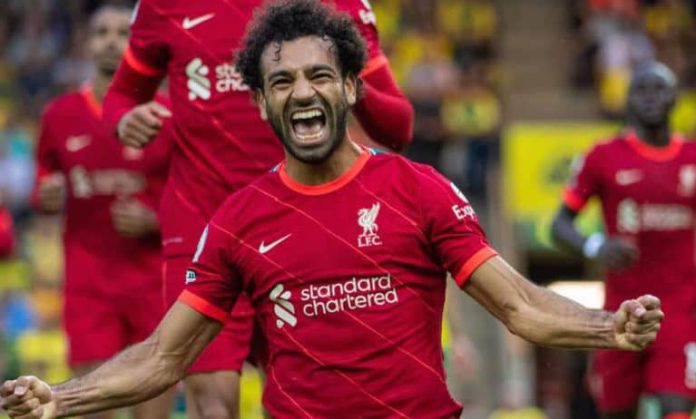 Egypt and Liverpool superstar, Mohamed Salah, spoke about the rumours suggesting that FC Barcelona are looking to sign him in the coming period.

Salah has been showing breath-taking performances since the start of this season with Liverpool, scoring 19 goals and making eight assists in 20 appearances across all competitions.

Since joining the Reds from Roma back in 2017, Salah has been the team’s top goaslcorer in each of their last four seasons and is not showing any signs of slowing down.

However, the winger’s future at Anfield is questionable, as he’s yet to put pen to paper on a new contract as he hasn’t reached an agreement with the club yet.

The Egyptian is reportedly demanding £500,000 in weekly wages, which would make the highest earner in the club and would force the board to surpass their very strict salary cap.

The 29-year-old revealed on various occasions his desire to stay with the Reds but says it’s up to the board to meet his financial demands.

“I said it several times, if the decision is up to me, I want to stay in Liverpool, but the decision is in the hands of the management and they have to solve this issue,” Salah told MBC Masr TV. “There is no problem but we have to reach an agreement for the contract, it’s up to them.

“Your financial value shows how much the club appreciates you and that they are ready to do anything for you to stay, but the decision itself is not based on those financial matters only.

“There are things like the ambition of the team and the coach and what he wants to do with the team and the players he wants. These are all important points when making the decision,” he added.

It was reported last month that newly-appointed Barcelona manager, Xavi Hernandez, wants Salah at the Camp Nou and the latter is flattered by the interest.

“I read what was said about Xavi’s interest to sign me, this is something that makes me happy that a team like Barcelona is interested in me, but I’m happy in Liverpool and we will see what happens in the future,” he revealed.

“At the moment, I prefer to stay in the English Premier League, as it’s the strongest league in the world,” the Egypt national team captain continued.

Salah then gave his opinion on Lionel Messi’s move from Barcelona to Paris Saint-Germain and Ronaldo re-signing for Manchester United.

“Messi’s move to Paris Saint Germain is different from Ronaldo’s move to United, because Messi stayed in Barcelona for 20 years, unlike Ronaldo, who changed leagues several times,” he explained.

“Maybe there was no agreement between the player and the club [on Messi transfer]. I’m not saying that the matter of adapting to a new league frightens me, on the contrary, it’s a new challenge for them to see what they will achieve in a new league. Ronaldo was good with Juventus and is also good with United, that’s something I don’t think about much.

“I love challenges very much, that’s why I returned to the English Premier League, to prove that I can play here. When I left for Italy, my main goal was to return to England,” he concluded.

Tokyo 2020 Olympics: Christine Mboma Out Of Olympic 400m Over Testosterone...