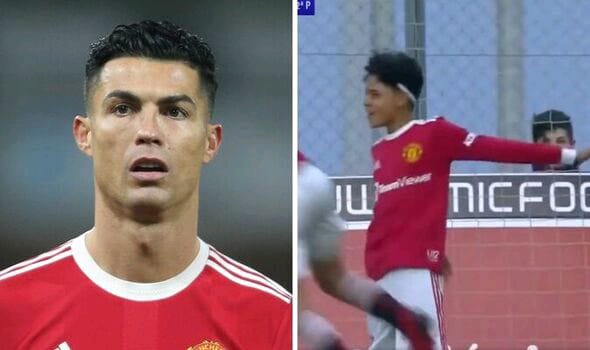 ’Cristiano Ronaldo has revealed how his 12-year-old son was left completely dumbfounded as to why Manchester United suspended ‘the best player in the world’ from playing.

Last month Sportsmail exclusively revealed that Ronaldo refused to come on as a late substitute against Tottenham at Old Trafford.

He was seen wagging his finger at manager Erik ten Hag before he stormed down the tunnel and left the stadium without authorisation before the match finished.

United were furious and Ronaldo was axed from the first team squad as a result, a decision that left Cristiano Ronaldo Jnr at a loss for words it has now been revealed.

‘I was very, very, very, very disappointed for the communication of Manchester United,’ Ronaldo told Piers Morgan during his 90-minute sit-down for TalkTV.

‘To be honest, I never had a problem with any club, with any coach. And they suspend me three days, which I felt it was a lot – and the level of sport, clubs, it felt a lot. It was a shame.

‘I think it was (humiliating).

‘But I remember arriving home and Cristiano (Junior) see me and say “Daddy do not go to the game?” I say “No, because the club punish me with three days”.

‘And he did like *laughs* “How they’re going to punish you if you are the best player in the world and you’re not gonna play?”‘

The 37-year-old superstar added that the suspension, the first of his prestigious career, was ‘good’ in one respect as he felt ‘more relaxed’.

But, he said: ‘But in the same way, I feel very disappointed because, OK, I regret, I apologise, I’m not perfect, I made a mistake.