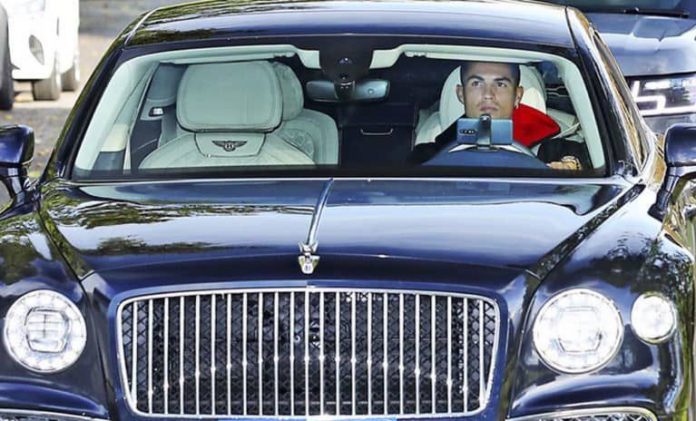 Manchester United star Cristiano Ronaldo has added another vehicle to his stunning fleet of cars with the addition of his £164k-value Bentley Flying Spur.

The model is described as the “pinnacle of Bentley luxury” and the Portuguese superstar was seen driving it into the club’s The AON Carrington Training Complex over the past week.

The 36-year-old is one of the highest paid players in world football and he has channelled a chunk of his huge wealth towards his impressive collection of cars.

The fresh purchase came less than a month after the forward’s return to Old Trafford from Juventus and is little surprise for a player who places great value upon his collection of super cars.

The third generation Bentley Flying Spur was presented in June 2019 with an improved design, technology and equipment to rank it as one of the most desirable models.

Unsurprisingly, the Bentley Flying Spur would be deemed as unattainable and out of budget for most people – costing five times more than the average UK annual salary – but it’s £164k valuation is relatively cheap compared to some of the player’s collection.

Some of the star’s most expensive cars include a Ferrari Monza which has a valuation of £1.4million, a Bugatti Veyron Grand Sport valued at £1.7million and a £2.15million Bugatti Chiron.

His girlfriend Georgina Rodriguez knows all about Ronaldo’s keen motoring interest and bought him a Brabus G-Wagon – which is priced at up to £600k – for his 35th birthday last year as a somewhat extravagant gift.
However, the jewel in Ronaldo’s car collection is the Bugatti Centodieci – a limited edition £8.5million vehicle of which only ten were made.

His other two Bugattis – which have a combined value of £3.85million – have ‘CR7’ embroidered headrests but the latest model is said to be a tribute to Bugatti EB110, and which has a staggering value making up of the five-time Ballon d’Or winner’s incredible collection.

In 2016, Ronaldo bought the Lamborghini Aventador, which has a valuation of just over £260k – the most celebrated model from the high-end Italian car designer.

He also possesses the only SUV that Rolls Royce have ever produced – the £330k Cullinan having previously bought up the £363k Phantom.

Another collector’s item is a tribute to Brazilian racing driver Ayrton Senna, as Ronaldo splashed out £1million on the McLaren Senna – of which just 500 models were made.

Do not be surprised to see the Portuguese adding more gems to his collection over the years ahead.

At least 20 people arrested following operation by SAPS in Kagiso

Invitation of My Two Daughters At Once Surprised Me – Peter...