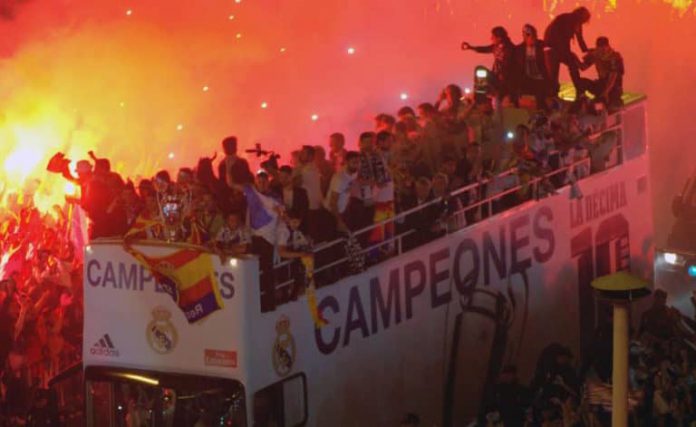 Real Madrid completed the most emphatic of La Liga title triumphs on Saturday after dominating Espanyol 4-0 at the Santiago Bernabeu to wrap up the championship with four matches to spare.

Such has been the inevitability of Madrid’s title success that the engine has been running on the open top bus for weeks and it finally revved into gear on Saturday evening, taking the players and staff from the stadium and into the city centre to continue the celebrations.

As the bus drove through the city towards the Cibeles fountain – the central landmark where the club usually celebrate their successes – Real Madrid were greeted by around 150,000 jubilant fans, who cheered and chanted the club’s 35th La Liga title.

The supporters started gathering around the Cibeles fountain almost an hour before the end of Saturday’s game, which Real won easily with two first-half goals by Rodrygo followed by goals from Marcos Asensio and Karim Benzema.

Traffic restrictions were put in place on Friday while a stage was built around the fountain where the players on an open-top bus traditionally join the fans coming from the Bernabeu to continue the party.

It is the first time Real supporters have had a chance to gather without wearing masks for a celebration after the Covid-19 pandemic as the club’s last league title triumph in 2020 was in the middle of lockdown.

Two hours after the game the players arrived at Cibeles and Marcelo, in what is set to be the last of the 33-year-old Brazilian defender’s 16 seasons at the club, took the traditional responsibility of ‘crowning’ the Greek goddess statue.

He placed a Real Madrid scarf around the head of the statue and a white flag with the club’s coat of arms over her chest as his teammates and fans raised their hands, waving in rhythm with ‘We Are The Champions’ which was being played loudly.

Real Madrid manager Carlo Ancelotti, famous for his cool and calm demeanour, was one of the more animated during the celebrations, closing his speech to the fans by shouting: “Let’s go against Man City!”, in reference to their Champions League semi-final, second leg on Wednesday.

That game was the reason for the party ending early by Spanish standards, with the players leaving just past 9pm local time. Ancelotti had rested several regular starters with Real hosting the second leg in just a few days’ time trailing 4-3.

Ancelotti said the celebrations were important “for the mental aspect” but reiterated that the players will be back to work on Sunday to prepare for City.

“We are professionals. Tonight we all celebrate together. Tomorrow we train and on Wednesday we have another important game,” Ancelotti said.