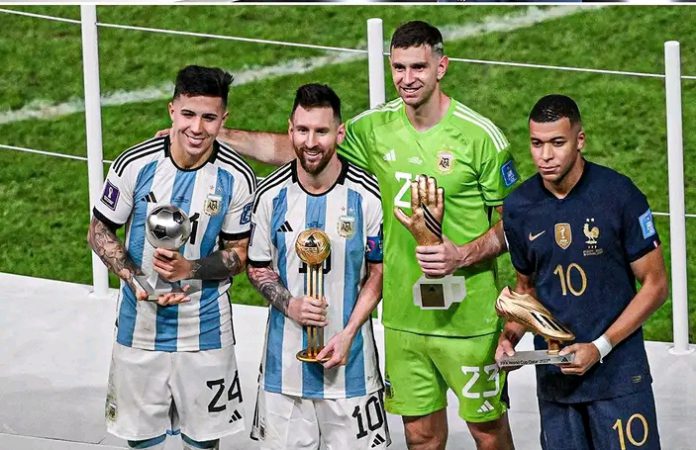 The adidas Golden Boot was won by Kylian Mbappe, with 8 goals and 2 assists. Lionel Messi collected the Silver Boot and Olivier Giroud from France the Bronze.

The Golden Boot was awarded to Kylian Mbappe the player who scores the most goals (8) in the final competition. If two or more players score the same number of goals, the number of assists shall be decisive. If two or more players are still equal after taking into account the number of assists, the total minutes played in the tournament will be taken into account, with the player playing fewer minutes ranked first. A Silver Boot and a Bronze Boot for the second and third-highest goal scorers will also be awarded.

The Golden Glove will be awarded to the best goalkeeper in the tournament, as selected by the FIFA Technical Study Group.

The Golden Ball was awarded to the best player in the final competition, Lionel Messi, on the basis of a ranking compiled by the FIFA Technical Study Group. A Silver Ball and a Bronze Ball given to Mbappe and Luka Modric beho were the second and third-best players.

The Young Player Award was presented to the best young player Fernandez Enzo (born on or after 1 January 2001) in the final competition, as selected by the FIFA Technical Study Group.