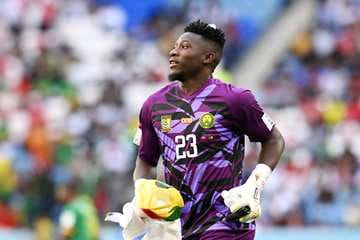 For the first time since his expulsion from the team, the Indomitable Lions of Cameroon goalkeeper Andre Onana has come out to speak about the decision.

The news broke out on Monday that the Inter Milan of Italy goalkeeper has been axed from the team by coach Rigobert Song due to disciplinary reasons.

The team coach after Serbia’s game on Monday opened up on why he was sacked from the team.

Onana who has returned to Italy has decided to speak on the issues.

” I have no problem with my big brother Ernest Obama, I was punished by president Eto’o and coach Rigobert Song who are my dads, I respect their decision.

Cameroon will confront Brazil in their final group match on Friday.