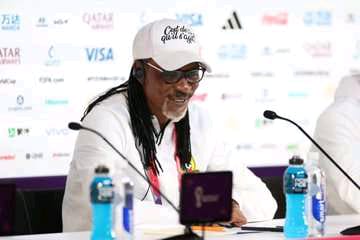 The head coach of the Indomitable Lions of Cameroon, Rigobert Song, has tagged their game against Serbia as a decisive game.

The former African champions suffered a narrow 1-0 defeat to Switzerland in their opening group game on Thursday.

Serbia also lost 2-0 to the Selecao of Brazil on the same day which makes Monday’s game crucial for both teams.

The former Cameroon captain admitted that his boys made huge mistake against the Swiss and paid dearly for it.

” It will be a decisive match, we can’t change everything because there were positives against Switzerland.

We made a mistake that cost us dearly, we are going to focus on the finish and the players confidence”, he said during a press conference.

Serbia will confront Cameroon in the second match of the group on Monday at 11am while the Cameroon engage Brazil in their last group game on Friday, December 2, 2022 at 8pm.

Isaac Success unsuccessful against Chelsea as Udinese lose 3-1 at home...