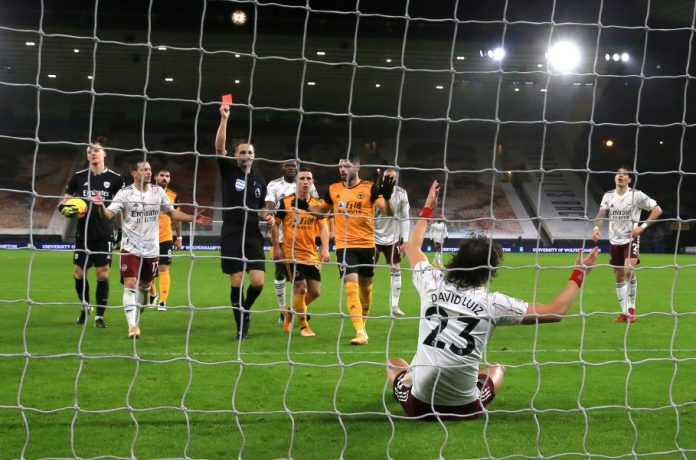 On the back of the far-reaching outcry stemming from Arsenal’s stalemate with Burnley this weekend, we have decided to take a look at some of the most high-profile decisions to have gone against Mikel Arteta’s men to this point in the season.

Arsenal: Just unlucky, or something more?

It is safe to say that the Gunners’ campaign, thus far, has proven altogether underwhelming.

Arsenal of course headed into the new term with confidence brimming in the club’s camp, on the back of an FA Cup and Community Shield double, and with summer reinforcements having arrived in a number of key areas.

The months since, however, have seen the north Londoners’ FA Cup defence and top-4 hopes alike go up in smoke.

This comes for a whole host of reasons, ranging from the teething problems that stem from a change of system, to a lack of creativity, to key players being sidelined for lengthy stretches.

Large sections of the Arsenal fanbase, however, have persistently made clear their feelings that, above all else, their side have suffered from what can only be described as a complete and utter lack of luck.

Such a narrative took centre stage online once again 24 hours ago, when the capital giants made their way to Turf Moor, for a Premier League meeting with Burnley.

Despite creating a host of clear-cut chances, seeing a penalty overturned and twice rattling the woodwork, Arteta and co. were eventually forced to settle for a share of the spoils.

This came after Arsenal fell victim to one of the most egregious officiating decisions of the campaign to date, when both referee Andre Marriner and the VAR team at Stockley Park came to the conclusion that the following Erik Pieters handball was not worthy of a penalty kick:

This, of course, proved far from the first major VAR decision to have gone against the Gunners this season.

Whilst essentially every Premier League team have fallen victim to the dismal implementation of ‘technology’ in the decision-making process in 2020/21, though, have Arsenal been particularly hard done by?

Last month, for example, it was revealed that the Londoners had benefited from just a solitary overturned VAR decision across the entirety of the campaign.

Compare this to a hefty 7 on the part of Manchester United:

No PL ‘Big Six’ side has had more VAR decisions overturned in their favour than Man United this season. pic.twitter.com/A4rBLtpU9i

Such statistics are of course meaningless without context, with Ole Gunnar Solskjaer’s United a side who would generally put themselves in a position to avail of VAR decisions on a more frequent basis than Arsenal.

The word ‘agenda’, though, nevertheless continues to be thrown around amongst the Gunners fanbase on an almost weekly basis.

Qualms over refereeing decisions are no longer a fleeting ‘here and there’ development when it comes to fixtures involving Mikel Arteta’s men, but rather a consistent talking point during post-match analysis sessions.

So, below, we have decided to highlight a series of major decisions from the Premier League season to date which, upon repeated inspection, left those of an Arsenal persuasion feeling as though their side had been wronged.

From here, perhaps a fairer judgement can be made regarding the legitimacy of the Gunners’ concerns.

Should he have seen red for this? 🟥

“They said that they checked and I said how the hell have you checked if you took 2 seconds.

4. 25th October: Alexandre Lacazette goal ruled out as Granit Xhaka adjudged to have been interfering with play from an offside position. Arsenal go on to lose 1-0.

Did Xhaka impede the keeper here?

Arsenal denied an opener after the offside ruling.

He went unpunished for this “very naughty” tackle on Granit Xhaka.

Willian Jose with a great run before being clipped for that penalty.

David Luiz so unlucky as his knee unintentionally clipped the back of Jose’s foot. Because Luiz didn’t make a genuine attempt to play the ball, he was sent off.#Wolves 1-1 #AFC #WOLARSpic.twitter.com/54pMAd9CbS

8. 6th February: Bukayo Saka adjudged to have been fouled by last man Ezri Konsa. Yellow card given. Arsenal go on to lose 1-0.

📺 Arsenal did eventually get a penalty confirmed by VAR, but not before this ‘foul’ from Liam Cooper on Bukayo Saka was overturned…#AFC pic.twitter.com/Vzy4qZfrNR

“He’s interfering with the trajectory of the ball, he’s got no intention to play the ball. It’s simple.”

Mikel Arteta was unhappy that his side didn’t win a penalty for a handball incident involving Erik Pieters. #beINPL #BURARS

What do you think? Have Arsenal fallen victim to a lengthy list of poor decisions this season? More so than any other side? Or are the aforementioned examples simply incidents which come to pass on a weekly basis in the current Premier League climate?

Whatever you choose to believe, upon closer inspection, it is not hard to see why fans of the Emirates outfit have begun making their frustrations with both the VAR system, and standard of officiating in the English game, increasingly clear.

Moroccan-Spanish Relations, Model Opposite to Algeria's Ties with Morocco (Writer-Journalist)