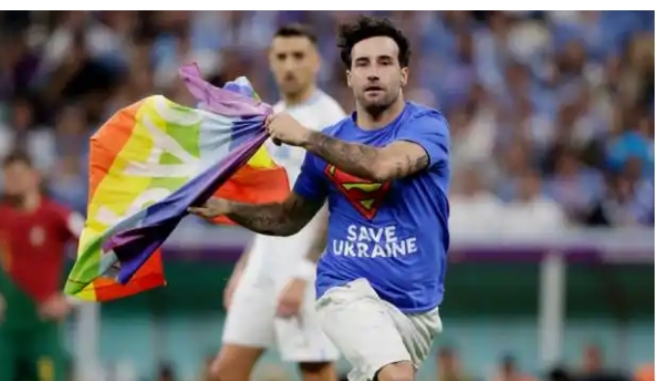 A protester carrying a rainbow flag invaded the pitch during the World Cup game between Portugal and Uruguay.

Mario Ferri wore a T-shirt with “Save Ukraine” on the front and “Respect for Iranian woman” on the back.

Stewards chased him and he dropped the flag before being taken off the field at Lusail Stadium.

Italian activist Ferri was released by authorities “after a brief detention”, said the Italian foreign ministry.

Qatar’s Supreme Committee confirmed he “was released shortly after being removed from the pitch” and that his embassy had been informed.

It added his Hayya Card – an entry permit to Qatar for World Cup attendees – had been cancelled and “he has been banned from attending future matches at this tournament”.

The decision to stage the World Cup in Qatar, where homosexuality is illegal, has been criticised by LGBTQ+ groups.

Ferri has staged similar protests before, including at the 2014 World Cup in Brazil, where he raised the issue of children living in poverty.

World governing body Fifa wrote to all 32 competing teams in the lead-up to the tournament in Qatar to tell them to “focus on the football”.

Russia Adds the Egyptian Pound to its Exchange Rate List: What...