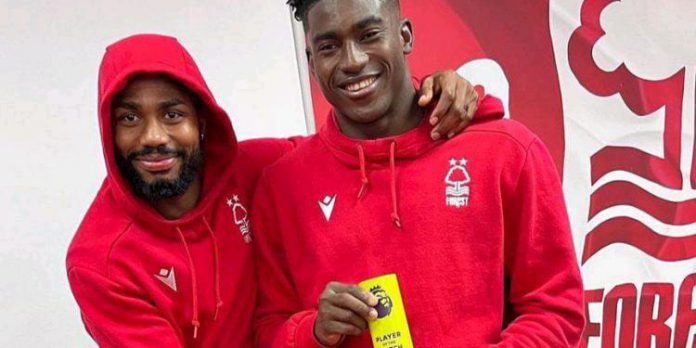 Super Eagles striker Taiwo Awoniyi has shared his excitement at winning his first Premier League Man of the Match Award after a great performance in Nottingham Forest’s 1-1 draw against Chelsea.

The Tricky Trees were faced with a difficult Chelsea hurdle in their first game of 2023. Nottingham Forest boss handed Awoniyi the difficult task of spearheading his attack, and the Nigerian star did not fail.

Chelsea started on top and dominated possession. They then got in front through a goal from Raheem Sterling.

However, Nottingham Forest started growing into the game in the dying embers of the first half. They eventually got their breakthrough in the 63rd minute through a fine strike from Serge Aurier.

Still, Awoniyi was awarded the Man of the Match. The 25-year-old forward made himself a nuisance for Chelsea’s center-back pairing of Thiago Silva and Kalidou Koulibaly.

Awoniyi managed to get one of his two shots on target while completing 80 percent of the ten passes he attempted.

The Nigeria international took to social media to share his elation at getting the big prize.

“Thankful to have gotten my first ever premier league MOTM award,” Awoniyi said.

“However, I am also disappointed a spirited performance from the team didn’t end with three points. We keep pushing.”

Next up for the Tricky Trees is a fixture at St. Mary’s against Southampton. Awoniyi would look to produce another masterclass and push his side to victory.

‘You Raila? Intimidate me? Forget about it’: Ruto on Azimio demos

Qatar 2022 Race: Pinnick Charges Eagles to Leave no Room For...