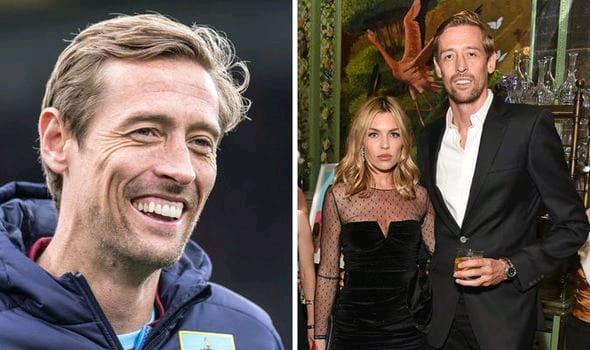 STANDING on a powder-white beach in the Maldives, they said “I do” for the second time last month – 11 years after first tying the knot.

But former England striker Peter Crouch has admitted that he had to put in the hard yards to woo his model wife Abbey Clancy into bed when they first started dating in 2005.

Model Abbey, 37, has revealed that she is a “freak in the sheets” when it comes to lovemaking with 41-year-old Peter — but she played her cards close to her chest following their first date in her home town of Liverpool where he played as a striker.

The couple, who now live in a £3million Surrey mansion with their children Sophia, 11, Liberty, seven, Johnny, five, and Jack, three, opened up about the early days of their relationship on their new podcast, The Therapy Crouch.

They told how they met at a birthday party in the bar underneath the restaurant where Abbey worked as a waitress.

Peter recalled: “Ab came over to me. It was insane. I couldn’t pull a hamstring in London.

“I went up to Liverpool and then you came over and I was like: ‘Wow — this place is incredible.”

Abbey added: “You scored that day. That was your first goal.”

Peter was celebrating ending an 18-game goal drought when he met Abbey after scoring twice against Wigan at Anfield.

He said: “I was struggling. Then, bang — I scored two and my hat-trick was Ab in the evening.

“You came over, and this sounds corny, but I have never seen a more beautiful girl in my life.

“I always remember your eyes. Your mum has got them as well. They’re incredible.”

She revealed that she was nervous about telling her parents, Karen and Geoffrey, that she was going on a date with a Liverpool player.

Abbey said: “He pulled up outside my mum’s and my whole family were looking out the window.

“I don’t know why I was being so secretive. I think because I was so young and I was embarrassed to tell my mum I was going on a date.

“My dad is the biggest Liverpool fan on Earth, but I remember telling them when we had a few dates and he went ballistic.

“He was like, ‘I can’t believe you are going out with a football player. It is such a bad look.’”

But the Wag was not treated to a lavish first date with the Premier League star — he took her to his local so he could avoid the paparazzi.

Recalling their first date in the back corner of an “old man’s pub”, Abbey said: “I think you had a bit of an ulterior motive because when we got into the pub, Pete was like: ‘That is my bedroom window there.’

“I was thinking: ‘Hang on a minute, does he think he is going to get me p****d and take me back to his flat? Because that is not happening whatsoever.’”

Peter said: “It was not a great first date. But at the time I was playing for Liverpool and just got in the England squad so everything for me had to be low-key.

“I had to find a girl that I loved but I didn’t want to take you straight into something mad. I wanted to go where no one could see us and find out if we got on.”

Abbey said: “Well that little wooden stool in the back of an old man’s pub was perfect.”

She turned up at the date wearing leopard print heels with £7 in her pocket.

Abbey recalled: “Pete got the first drink, then I thought I would get the next one.

“I had never bought a drink in my life. I didn’t even know how much it was.

“Pete wanted Guinness. So I went to the bar, got Guinness and a glass of tap water because I was scared it was going to be more than £7.”

Peter described the model as a “tough one to crack”, and Abbey responded: “Yeah, because I am not a complete ho.”

Turning to her husband to ask if he considered her “frigid” at the time, Peter joked: “Not a fridge, no.”

Remarking on what she is like in the bedroom, Abbey added: “Lady on the street, freak in bed.”

“Ludacris said it well,” Peter joked, referencing the lyrics “Clean in the work place, dirty in the sheets” from the rapper’s hit Nasty Girl.

She said: “I knew from the day I met you that we were going to be together forever.

“Call that sounds corny but I did know that and I thought, ‘I don’t want to rush this.’