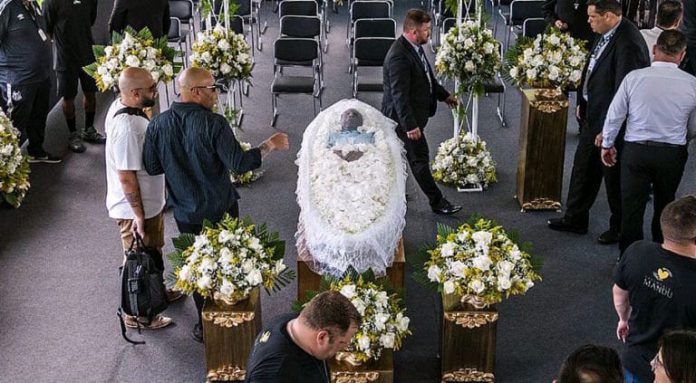 PELE mourners lined the streets yesterday at Santos football stadium to say a final farewell at the legend’s funeral.

His funeral was held in the stadium where he played some of the best matches of his career.

Pele had been receiving treatment for a tumour in his colon – but stopped responding to care.

On Thurday evening the news broke that the greatest player in history has sadly passed away due to multiple organ failure as a result of his cancer.

Pele died with his family by his side and holding his hand.

His coffin arrived at the Santos pitch early on Monday after travelling from hospital in Sao Paulo.

Pele was placed in the centre of the field and fans was able to pay their respects before a procession through the streets of Santos to celebrate the icon.

Visitation started yesterday at 10am and will finish today at the same time.

Pele’s coffin was carried through the streets and in front of the home of his 100-year-old mother, Celeste.

The burial will take place at the Memorial Necropole Ecumenica and only family will attend.

His final resting place will be in a unique “vertical cemetery” in a 14-floor building which includes 14,000 vaults, a waterfall and a car museum.

It includes crypts, rooms to hold services, a crematorium, and a mausoleum “for families who want to preserve their legacy in a more personal and private way”.

It even contains a tropical garden that includes a small rooftop cafe and a waterfall also.

Nicknamed The King, Pele won three World Cups with Brazil between 1958 and 1970 – the only player in football history to achieve the feat.

His amazing haul of 1,279 goals in 1,363 games, which included friendlies, is recognised as a Guinness World Record.

He also scored a remarkable 77 goals in 92 games for the national team – a record equalled by Neymar at the recent World Cup.

The current Brazilian No.10 has led the huge outpouring of tributes to the late, great superstar along with modern day greats Cristiano Ronaldo and Lionel Messi.

Pele made his debut for his local team Santos aged just 15 and won his first cap for the Brazil national team at 16.

The South American superstar racked up 643 goals in 659 appearances for club side Santos across his 18-year spell.

Gold-for-oil will lead to arbitrary selection of BIDECs, unfair practices –...