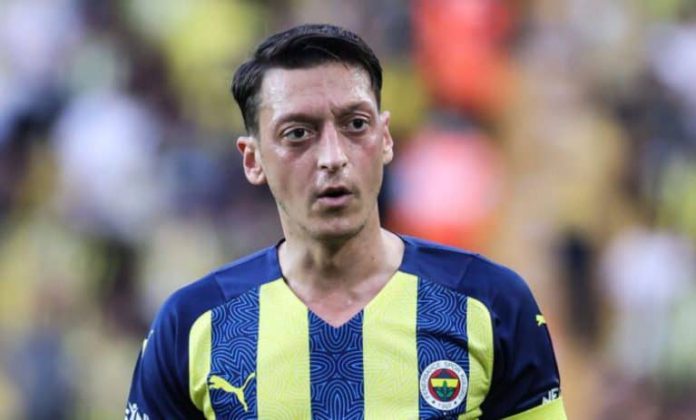 Most footballers opt for becoming pundits, managers or coaches once they hang up their boots and call it a day as a player.

However, this doesn’t seem to be the plan for former Arsenal and Real Madrid star, Mesut Ozil…

To say its been an odd career for the former Premier League star since he reached his peak at the Bernabeu and Emirates Stadium would be an understatement.

After leaving the Premier League six months early in 2021 following a falling out with Mikel Arteta, Ozil was then excluded by his new club, Fenerbahce for a ‘fitness dispute‘ with then-coach Ismail Kartal.

And now – in true Ozil style – it’s been revealed that his future occupation is set to be something that definitely bucks the trend of typical players’ retirement plans.
In an interview with the Daily Telegraph, the ex-Gunners man’s agent, Dr Erkut Sogut, opened up about his client’s career.

But whilst a lot of the conversation was unsurprisingly about his time at Arsenal, Ozil’s agent also revealed what the 33-year-old wants to do after he calls time on his career. And, to Gunners fans, it probably won’t be much of a surprise.

Describing the role as an ‘e-sports athlete’, Sogut explained that Ozil had a real knack from the popular games FIFA and Fortnite.

Ozil actually owns an eSports team, M10 eSports, which he launched in 2018, and the star’s agent has suggested he is now considering taking the role on full-time when he retires.

During his time at the Emirates, Ozil was often accused of spending too much time playing video games, with reports suggesting he was spending five hours a day on consoles.

After missing games for Arsenal due to back problems, sports physician Ingo Frobose confirmed to German newspaper BILD his belief that his gaming habits may have been the cause, or at least exacerbating Ozil’s back trouble.

Now, it seems his passion could reach new heights, with his agent confirming the Fenerbahce star sees video gaming as his future.

“He will go more into eSports, play himself and maybe become an eSports athlete,” Sogut said.

“He’s really good, to be honest, at Fortnite and I think one day I wouldn’t be surprised if he is competing.”

At the moment, Ozil has two years remaining on his contract with the Turkish giants. But should his deal be scrapped, Sogut explained that retirement would be the next step, rather than looking for another club.

“I think he will not play football in any other club any more. I can’t see that – it will be Fenerbahce and that’s it,” he said.
Ozil is expecting to stay at the club, according to his agent.

But it looks like the former Gunners star could be permanently ditching his boots for a headset and controller in the not so distant future.