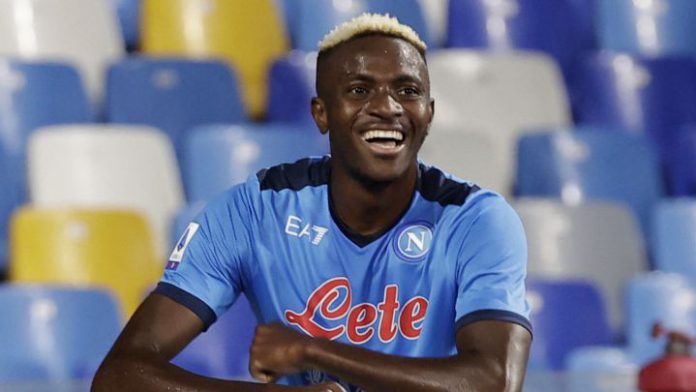 Napoli eased past Legia Warsaw 3-0 in a Europa League clash at Stadio Diego Armando Maradona on Thursday night after three goals in the last fifteen minutes of the contest.

The Azzurri broke the deadlock in the 76th minute through Lorenzo Insigne, who met a cross and lashed home, before Victor Osimhen, a 57th minute substitute, doubled the advantage with a powerful finish from a tight angle after a brilliant pass from Insigne in the 80th minute.In doing so, the Nigeria international became the second Napoli player to have scored in each of his first three appearances in a single season in European competition in the 21st century, after Dries Mertens in 2015-2016, according to OPTA.

Speaking shortly after the game, Mertens was impressed by Napoli’s second scorer against Legia Warsaw.In quotes relayed by UEFA’s official website, Mertens stated : “Osimhen arrived last season and had a few difficulties settling.”He also had injury problems, so I tried to help him. He’s a smart lad who wants to listen and learn. I give him all the love in the world.”Including strikes against Leicester City, Spartak Moscow and Legia Warsaw in the Europa League, Osimhen has tallied nine goals in all competitions so far this season.

Aisha Buhari’s Future Assured, a game-changer for the girl-child – Akaraonye