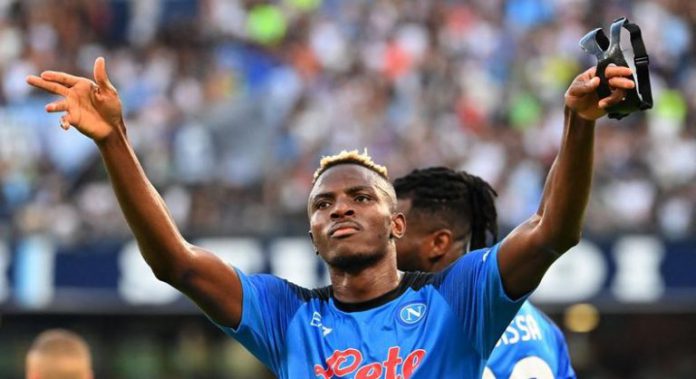 Napoli resumed training at the SSCN Konami Training Center on Thursday, two days after they silenced Ajax Amtserdam in the Champions League.

The Parthenopeans have started preparations for the match against Cremonese scheduled for Sunday evening at the Zini Stadium – a game that corresponds to the ninth round of fixtures in the Italian Serie A.
However, Victor Osimhen who on Thursday welcomed his first child, was found missing in the training session.
But the club has revealed that his absence is not due to the injury he’s recovering from.
Disclosing further, Napoli informed through their official website that the father of one did not train for family reasons.
The 2015 FIFA U17 World Cup Golden Boot winner has not fiutured for the Blues since coming off injured in the closing moments of the Champions League win against Liverpool on September 7.
Napoli has been doing fine without its record acquisition, having won five straight games in all competitions while scoring a total of fifteen goals.
The team coached by Luciano Spalletti leads the way in Serie A with 20 points from eight matches and has maximum points after three games in the Champions League.

US Militia Leader Guilty Of Sedition In Capitol Assault

I AM SET TO REPOSITION JUDO AMONG THE COMMITY OF NATIONS-...