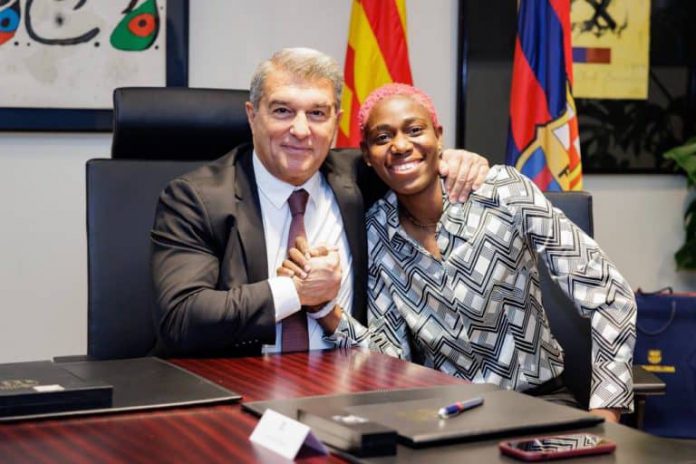 Super Falcons captain Asisat Oshoala has ended speculation about her future by signing a new contract with FC Barcelona Femení, informs the official website of the European champions.

Oshoala’s contract was expiring at the end of the 2021-2022 season but she has extended her stay by a further two seasons, keeping her at the club until June 30, 2024.

The signing ceremony was witnessed by president Joan Laporta and director Xavier Puig in the president’s office at Camp Nou.

Oshoala joined Barcelona in January 2019, first on loan before the deal was made permanent, and she is now the sixth highest goalscorer in the history of the club with 80 goals in 101 competitive appearances.

The 27-year-old, a four-time African Footballer of the Year, is currently the leading goalscorer in the Primera Iberdrola league with 16 goals in 19 games.

Here’s every word she said after putting pen to paper : “I’m really happy, excited to continue the journey with the best team in the world obviously. Nothing to see here, just a girl who decides to stay at home.

“The goal of every player is to make sure they get to the next level, every year you give yourself a goal. You want to smash some goals and in four years you can see that it’s being a progression – winning trophies, being better on the pitch, scoring more goals everyday and also it has been really comfortable for me.

“When you say the club is the best it is not basically only because of the trophies. Generally you look outside of football, how is life away from football, how is the team here, how they treat players.

“I just think the management has done a really good job in terms of improving and helping each player on and off the pitch to improve generally in life and also football wise.

“Four years ago I wasn’t like this. My mentality was different from what I have now and after three and a half years I think I have learnt a lot being here.

“To be honest with you I am a striker and what I love to do most is scoring goals. I just think the most important thing is to keep improving, score more goals as much as I can and get more opportunity to keep making myself happy because this is what makes me happy.”