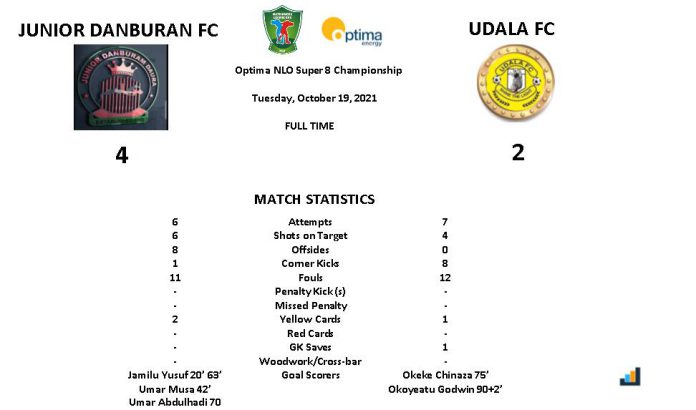 Danburam bounce back to pummel Udala 4-2.

Danburam Fc lost narrowly to Doma Utd on match day game played yesterday, but a brace from Jamilu Yusuf in the 20th minute and 63rd minute put the team on a cruise control of victory.

The fluid flowing football and their attacking forays created diverse problems for Udala Fc as Umar Musa registered the second goal for his side in the 42nd minute.

Umar Abdullahi, who scored the lone goal for his side in their 2-1 loss to Doma Utd was again on the scoresheet, when he hit the back of the net to make it 4-0 demolition of Udala Fc.

Five minutes later, Okeke Chinansa reduced the tally when he scored from a tight angle to make it 4-1.

The remaining minutes of the game saw Udala Fc piled pressure as they created chances, but the team only had another goal for consolation in the 90th minute courtesy of Godwin Okoyeatu to end the game 4-2.

Ottasolo fc continues their poor form after they lost 3-0 to JM Liberty Fc of Makurdi.

JM Liberty Fc had the game under control in the first half but their dominance could not be reflected on the score board as the half ended goalless.

With the few fans at the stadium cheering Ottasolo fc, the players of JM Liberty were unfazed as their energetic and attacking play was rewarded with a goal in the 61st minute after a sublime finish from Shittu Olagunju.

Olagunju was well positioned to punish Ottasolo again with his brace in the 76th minute to make 2- 0 advantage for the Makurdi based side.

Efforts by Ottasolo to reduce the tally proved abortive as Akuki Musa in goal for JM Libery was equal to the task to deny any come back attempt from Ottasolo.

The game was put beyond reach of Ottasolo as Isiaka Moses nailed them with his goal in 90th minute to make it 3-0 demolition.

Photo 3. Action in the game between JM Liberty and Ottasolo

Rudiger: Why I Dumped Chelsea