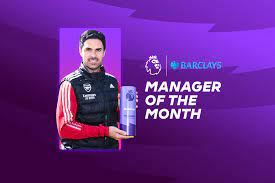 Arsenal manage, Mikel Arteta has been voted best English Premier League Manager of the month of December, after having a succefull run to maintain the league’s top position.

The Spaniard maintained Arsenal’s impressive start to the season either side of the World Cup and has been duly rewarded with his second such award of the season.

Wins against Chelsea and Wolves prior to the Qatar tournament closed out Arsenal’s first part of the season in solid fashion before they picked up where they left off on Boxing Day against West Ham with a comprehensive 3-1 victory.

Their 4-2 win at Brighton on New Year’s Eve ended a poor run of recent results against the Seagulls.