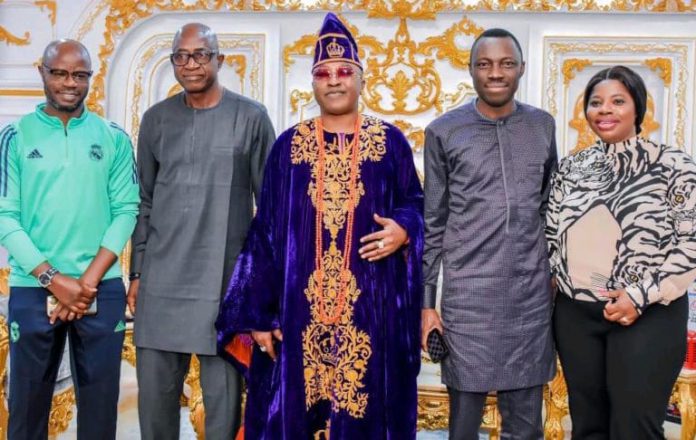 Celebrating the birthday at the academy in Ile-Ogbo, the headquarters of Ayedire Local Government Area of Osun State, the founder, Engr Lanre Adeleke, explained that the Academy had admitted 58 students on scholarship last year, saying “we are admitting 42 this year to make it 100 in honour of Chief Segun Odegbami who is the lead consultant on the project.

“The plan is to catch them young and make sure that they receive the best of training and expose them to the global standard in the area of a sport – football, basketball and handball.

He commended Odegbami for putting up the curriculum and giving advice on how to set up the facility.

Speaking, Odegbami described the event as one of the happiest days of his life.

He said, “I didn’t want to celebrate my 70th because I don’t want people to see me as an old person. This is the best birthday of my life. I didn’t ask for it. I will never forget the rest of my life. The number of traditional rulers sitting here marvels me.

“Today is one of the happiest of days of my life because this is totally unexpected, totally unsolicited and the magnitude of the depth of love that has been shown to me today is unprecedented.”

He commended Adeleke for the surprise birthday and for putting up the Academy for the less privileged and paying for their accommodation.

Also, another ex-super eagle star, Mutiu Adepoju (aka headmaster), thank God for the life of Adepoju who he described as “a leader and mentor in football.

The Oluwo of Iwo, Oba Abdulrosheed Akanbi, who spoke on behalf of other 13 monarchs at the event, said Adeleke deserved a national award for his contribution to sports in Nigeria.

The monarch described the academy as an ivy league, saying the founder, Engr. Adeleke should be honoured by the federal government with a national award.

“On merit, Engr. Abel Lanre Adeleke deserves a national award. He is a patriotic Nigerian building both the mental and physical assets of the nation. He established an international Sports Academy here in Iwoland, therein, discovering and promoting the talents of the less privileged. Those children, with special sporting talents, many of whose parents cannot afford education were discovered to benefit from scholarship with free boarding and feeding.”

Clampdown on party hill in Northcliff