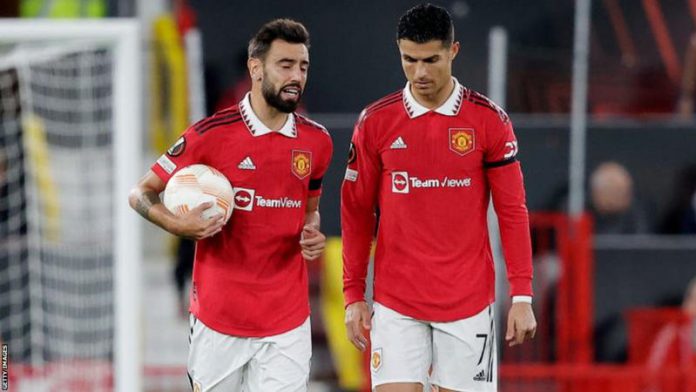 Portugal midfielder Bruno Fernandes says it was a “dream” to play with Cristiano Ronaldo at Manchester United but “nothing lasts forever”.

Ronaldo’s contract with United has been mutually terminated.

Portugal begin their World Cup campaign against Ghana on Thursday and Fernandes says the players have not been distracted by Ronaldo’s situation.

“We haven’t discussed the topic – we are all focused on the national team and the World Cup,” said Fernandes.

Ronaldo’s United exit follows a controversial interview in which the 37-year-old criticised the club and said he had “no respect” for manager Erik ten Hag.

Fernandes added: “You know how important playing for Portugal is for Cristiano and for all of us. It is the dream of every player. Our focus is 100% on the national team and we are all aware of what we have to do.

“I don’t feel uncomfortable. It was a privilege to play with Cristiano and a dream at the club. Cristiano has always been an inspiration for me, it was a dream to be able to play with him at Man Utd, but we know nothing lasts forever.

“It was good while it lasted but we have to respect his decision, regardless of us agreeing or not.

“We know it might be difficult to make decisions but these must be for the best of our families.”