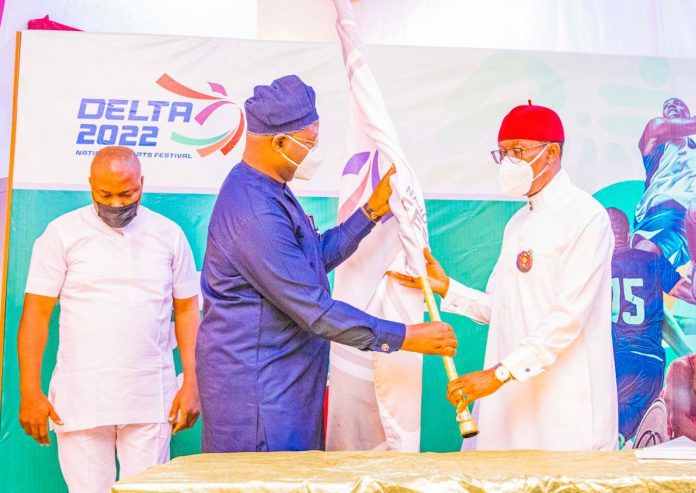 • Dare Describes Delta As Incubator of Talents For Sports Development

The National Council on Sports has approved November 2 to 15, 2022 as the dates for the 21st National Sports Festival in Delta State tagged Asaba 2022 just as the Minister of Youth and Sports Development, Sunday Dare described Delta State as the incubator of talents for the nation’s sports development.

Speaking on Monday in Asaba, the Delta State Capital, at the Extra-ordinary National Council on Sports meeting, the Minister thanked the State for hosting the all important sports meeting, stating that the successes of Nigeria in sports won’t be complete without the contribution of the State, and the giant strides of her athletes.

“Therefore, this meeting today puts us at the cusp of another National Sports Festival (NSF) which we refer to as our own Olympics. The National Council on Sports meeting today has become necessary in order to update Council on developments, and deliberations on issues that concern the hosting of the 21st National Sports Festival which Delta State had earlier won the rights to host in November 2022”.

“Interestingly, Delta State came first at the recently concluded Edo 2020. Now, we are happy that they have the opportunity not just to host, but to validate their first position. Arising from the award of the hosting rights to Delta State, the Federal Ministry of Youth and Sports Development has continued to engage the Host State on the need to fine-tune the road map in preparation for the NSF”, Dare emphasised.

The Minister commended the National Council on Sports for their commitment and steadfastness to sports development, lauding the support he and the Ministry have received over the past two years. Also, he expressed gratitude to the host Governor, Gov. Ifeanyi Okowa for his immense contribution to sports development, stating that the feat achieved by the nation at the just concluded Tokyo Olympics won’t have been possible without the 12 athletes adopted by the Governor under the Ministry’s Adopt-an-Athlete initiative.

” He single-handedly adopted the largest number of athletes and we are glad that out of the two medals we won, one of them was won by one of the athletes adopted by the Governor. That is Ese Brume,” the Minister asserted.

In a bid to exalt the National Sports Festival as Nigeria’s version of the new Olympics, the Minister announced that the Ministry in collaboration with the office of the Head of the Civil Service of the Federation (OHCSF) has established a Department that is solely responsible for the National Sports Festival and Para-Sports. “With this development, Para-Sports has equally been given the desired attention”, the Minister concluded.

Governor Okowa in his remarks, thanked the Ministry of Youth and Sports Development for the opportunity to host the National Sports Festival, promising to not only surpass the standards of Edo 2020, but make the 21st edition of the games, the best in its history.

The highlight of the event was the signing of the Memorandum of Understanding (MoU) for the hosting of the NSF tagged “Asaba 2022” by Governor Ifeanyi Okowa and the Minister, Chief Sunday Dare.