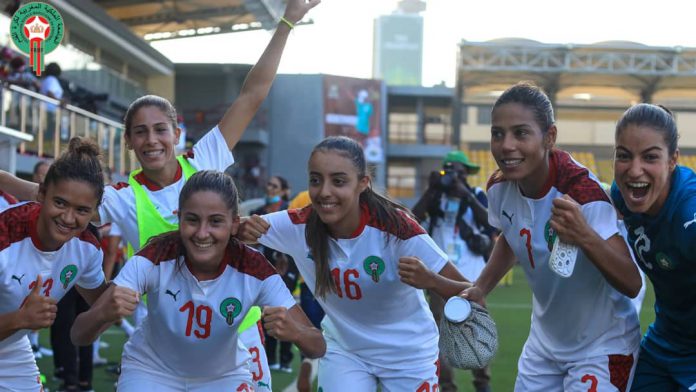 Morocco senior women’s team pulled off an upset against continent’s powerhouse Cameroon as the Atlas Lionesses secured a stunning 1-0 victory over the Indomitable Lionesses in Thursday’s Aisha Buhari Cup encounter in Lagos.

The North Africans continued from where they left off in June’s doubleheader wins over Mali to condemn new Cameroon coach Gabriel Zabo to a defeat in his first game in charge.

Smarting from April’s Tokyo 2020 qualifying playoffs defeat to Chile, the Indomitable Lionesses pushed forward in large numbers in search of an early goal but could not beat Morocco goalkeeper Errmichi Khadija.

Rose Bella came close twice and Gabrielle Onguene’s brilliant effort came off the crossbar for Cameroon but the clinical Moroccan defence forced a goalless draw at half time at the Mobolaji Johnson Arena, Onikan.

After the break, Reynald Pedros’ side made the best of their golden opportunity when Fatima Tagnaout got on the end of a fine counterattack to grab the 78th minute winner.

Having earlier won doubleheader friendly this year, Pedros will hope to extend their dominance to Mali when they take on the West Africans in their final match at the Aisha Buhari Cup on Sunday, September 19.

On the other hand, Cameroon will look to record their first win of 2021 when they meet Ghana in their final game of the invitational on Monday, September 20.

“We have really worked hard to get to this stage. You could see that both foreign and home based players played without fear and becuase they wanted to win. We are not at out best yet, but still work in progress. We are working mostly to develop the players at home (in Morocco). When they are joined by those abroad, it will be a great combination. We won today’s (Thursday) game because the players were really determined to win.”

“It means a lot to us because we worked very hard for it. I want to thank everyone for the great result today. We came here (Lagos) with the aim to win and also improve ourselves. We know that the teams we are playing are the powerhouses on the continent, so we were eager to also assess our level. We are also hoping to continue to show everyone in Africa that we are also a good and exciting team to watch.”

“I want to congratulate Morocco for today’s victory. They really worked hard for it and fully deserved the win. They had one opportunity in the match and took it but we didn’t take any of our several chances. In the spirit of sportsmanship, we accept defeat and congratulate Morocco once again