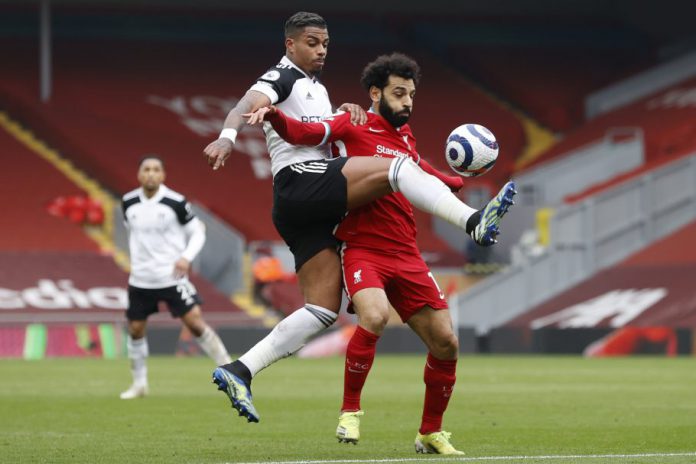 Liverpool fell to yet another damaging defeat at the hands of Fulham this afternoon, with Mohamed Salah having since been singled out for particularly heavy criticism.

Jurgen Klopp’s men welcomed the Cottagers to Anfield a short time ago, for their latest Premier League outing.

The Reds of course headed into proceedings nothing short of desperate for a positive result, on the back of an abysmal recent spell of form.

A 1-0 defeat at the hands of Chelsea during the week made it 5-straight at home for Liverpool, in the process setting an altogether unwanted club record:

As outlined above, however, when all was said and done this afternoon, things only went from bad to worse for the hosts.

Another sub-par display eventually saw relegation-battling Fulham emerge on the right side of a 1-0 scoreline, in the process dealing a potentially fatal blow to Liverpool’s top-4 hopes.

The only goal of the game arrived on the stroke of the interval, when Mo Salah was dispossessed on the edge of his own area by Mario Lemina, who went on to direct a wonderful low strike into the far corner of Alisson’s net:

It’s no less than Fulham have deserved! 👏

Mario Lemina picks Mo Salah’s pocket on the edge of Liverpool’s box before rifling a low effort past Alisson for the openerl! 🚀

Liverpool now sit a full 4 points off 4th-placed Chelsea in the Premier League table, despite having played a game more.

As such, on the back of yet another frankly dreadful showing on the part of the champions, it has since come as little surprise to see a number of Jurgen Klopp’s stars singled out for heavy criticism online.

The likes of Andy Robertson, Gini Wijnaldum and Xherdan Shaqiri have all been targeted, following sub-par individual performances.

None, however, has been more widely condemned than star attacker Mohamed Salah.

The Egyptian endured another difficult 90 minutes this afternoon, albeit, for the most part, no worse than the majority of his teammates.

It was Salah’s central role in the game’s solitary goal, though, (along with some customary diving) which has since seen viewers, both of a Liverpool persuasion and not, set their sights on the former AS Roma man:

Salah is technically terrible on the ball. Why is he back there?! He did this vs Chelsea too did a dicky pass with outside of his boot which barely left his boot and Chelsea player turned and put ball inbehind straight away.

The quicker Salah goes the better, Don’t give a f-ck what anyone says a greedy shit house.

We have. So has Salah. It’s painful seeing his lack of desire, awful touch and his total lack of confidence on the ball. Something seriously wrong at the club. Whole team is woeful.

Salah at it already pic.twitter.com/zfWcZDIizd

Liverpool’s biggest problem is Salah. The mistake he makes today is absolutely shocking. It doesn’t matter how many goals you scored. You just can’t defend like that!!!!!! #LIVFUL

Things that are certain in life:

Anyone who thinks this is Klopps fault needs to give their head a wobble. The squad aren’t even making a fucking effort at this point. No sense of urgency going forward. Salah is the most ball greedy individual I’ve ever seen.

What on earth has happened to Liverpool? Salah looks a shadow of his former self #LIVFUL