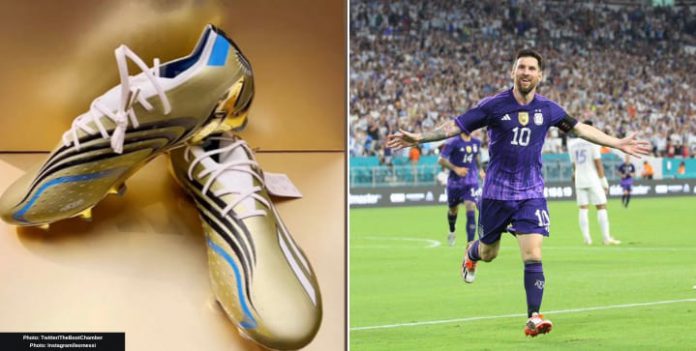 The boots that Lionel Messi will wear at what is set to be the last World Cup of his iconic career have been unveiled.

Messi, in an interview with an Argentine journalist in October, confirmed that Qatar would be the last time he represents his country at football’s grandest stage.

Adidas unveiled the golden boots that Messi will wear in Qatar – which are said to take inspiration from the ones he wore at his first World Cup in 2006.

Messi has won everything there is to win throughout his legendary career – except for the World Cup.

The closest he came to lifting football’s biggest trophy came in 2014, when Argentina were on the wrong side of a 1-0 defeat to Germany.

Argentina, who won the Copa America last year, are one of the heavy favourites to win it all in Qatar this winter.

And they will hope that the colour of Messi’s boots for the World Cup, will reflect how they perform in Qatar.

The Adidas X Speedportal boot is primarily gold, but with blue and white detailing to represent the colours of the Argentinian flag – along with a black stripe down the back.

They are part of a pack entitled Leyenda, which in Spanish, translates to legend.

Messi will wear the special-edition model for the first time against Saudi Arabia on November 22 and throughout the rest of the World Cup.

As well as Saudi Arabia, Argentina will face Mexico and Poland as part of Group D.

Back in October, Messi told Argentine journalist Sebastian Vignolo: ‘This will be my last World Cup — for sure. The decision has been made.

Messi is set to play in his fifth World Cup in Qatar and has scored six goals in the previous four editions of the tournament.