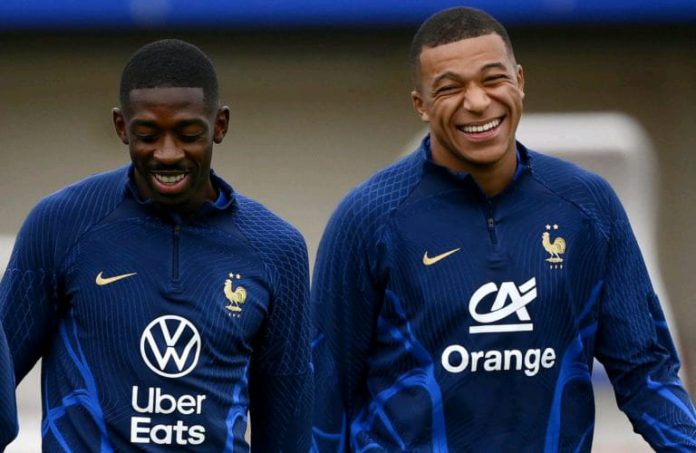 The 25-year-old officially became a free agent in the summer after running down his Blaugrana contract, but he soon agreed to a two-year extension.

Dembele has now entered the final 18 months of those terms, potentially leaving Barca in a position where they could be pressured to sell in the current or future transfer windows.

Barcelona unsuccessfully tried to force Dembele out of the club last January, and he was widely expected to complete a mid-season switch to PSG, but a move failed to materialize.

Chelsea and Manchester United were also understood to hold an interest in the former Borussia Dortmund man, but the English giants are now said to have pulled out of the running.

According to Spanish outlet Fichajes, Mbappe and Dembele have forged a strong relationship in the France camp, and the former believes that the Barcelona man would be a good signing for PSG.

Dembele was a constant fixture of the France team during their run to the World Cup 2022 final, setting up two goals in seven games, but he was taken off in the first half of the showpiece match with Argentina.

The report adds that Barcelona boss Xavi has been left delighted with Dembele’s contribution to Barcelona this season, and he is keen to see the ex-Rennes starlet stay at Camp Nou for longer.

However, Dembele could supposedly be allowed to leave the club in the current window given his contract situation, although Barca are expected to prioritize renewals over signings in the New Year.

The Frenchman has shone for Barcelona this season with five goals and seven assists in 21 matches across all competitions, having ended the 2021-22 season with a league-high 13 assists in La Liga.

School set on fire in North West – equipment, furniture and...

PSG boost as Neymar trains ahead of Barcelona