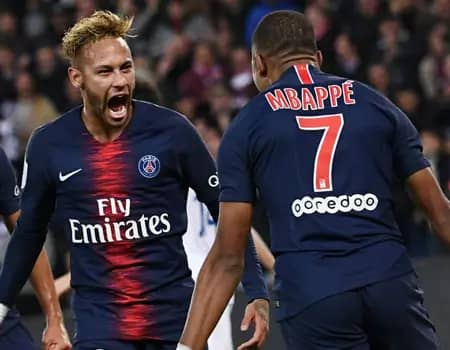 Kylian Mbappe insists Lionel Messi’s Ballon d’Ors count for nothing in Paris as the PSG new boy continues to adapt.

The Argentine left Barcelona in the summer after several contract issues and moved to the Parc des Princes for nothing.
Messi, arguably the greatest player of all-time, broke numerous records in Spain, but has not been able to translate that form across the Pyrenees.
He provided two assists during PSG’s 3-1 win over Saint-Etienne on Saturday night but has only scored seven times in 23 outings this term.
Messi is on course to post his lowest goal tally in well over a decade with Mbappe confessing his previous exploits count for nothing.
The Frenchman bagged a brace and is confident his teammate is firmly on the rise.
Mbappe told reporters: “He’s a great player. I’m happy for him because we know he’s adjusting to a new life, a new city and a new club.
“And even when you win seven Ballons d’Or, you have to adapt too.
“But he is getting better and better, he is happy and I always said it in the first part of the season, if we have a great Messi, it’s better.
“With him it’s easy. I’ve always wanted to play with great players and great players are made to play with great players and we have a blast on the pitch. Personally, I really enjoy it.”
Angel di Maria, a teammate with Messi at club and international level, has tried to do his bit for his compatriot.
The Argentine moved to Paris back in 2014 and tried to impart what wisdom he could to Messi.
He said last month: “When Leo Messi arrived more recently, we in turn tried to help, to give them advice and make sure they adapted as quickly as possible. I think that’s the most important thing, to make them feel comfortable from day one.”
Mbappe’s brace on Saturday night ties him with Zlatan Ibrahimovic on 156 goals.
He is still some way off the PSG’s record goalscorer Edinson Cavani, who bagged 200, but suggested he may aim to topple him despite talk of a move away.
“When you know what Zlatan did here, it’s symbolic,” he said.
“These are high standards, we’re in an exclusive circle. I’ve managed to equalise with him, and unless there are any issues I think I’ll overtake him.
“There’s still Edi remaining [ahead]. We’ll see how things go. But obviously being PSG’s all-time top scorer is nothing to be scoffed at, so we’ll see what happens.”

Mudavadi meets 35 Western MPs in an effort to consolidate region

North-East Oil Drilling: We Will Avoid Mistakes Made In Niger Delta,...

MONDE ENTIER :: How to Make a Profit in Crude...

Explanations provided for substitute Rodrigo being hauled off & Liam Cooper...