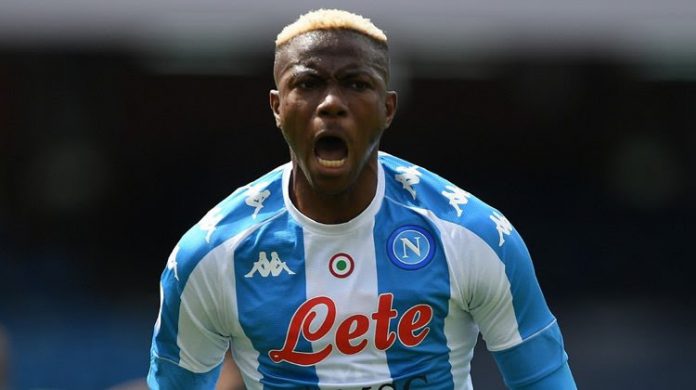 Super Eagles striker, Victor Osimhen has been earmarked by English giants, Manchester United, as the likely solution to their goal-scoring problems, and therefore, a target for the summer transfer window.

The Napoli forward is also said to be on the radars of Spanish giants as an alternative to their top targets such as Borussia Dortmund’s striker, Erling Haaland.

The 2015 U-17 World Cup winner, who moved from Lille of France to Italy’s Napoli for €75 million is touted to replace Anthony Martial, who is currently on loan to Sevilla.

According to reports from Italy, to avoid any vacuum should Osimhen eventually join Manchester United, Napoli have already started sounding out potential replacements for the Nigerian, with Sassuolo’s Gianluca Scamacca their preferred replacement.

Napoli, according to cultofcalcio.com, wants to keep Osimhen for another season in their bid to win the Italian Serie A and it would take a fee of €100 million to lure the Nigerian away from Naples.

Manchester United, two seasons ago, bidded for Osimhen when they had a strikers’ crisis, but the former Wolfsburg star rejected the overtures in deference to Odion Ighalo, who was then on loan at Old Trafford.