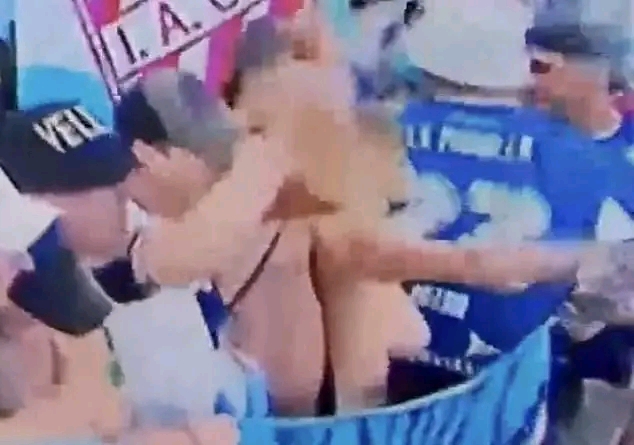 An Argentina fan was spotted by viewers taking off her top in a fiery celebration of Argentina’s spectacular victory over France tonight, risking jail time in conservative Qatar.

After Gonzalo Montiel’s penalty kick, cameras turned towards cheering Argentina fans and among them was a blonde fan who gave the cameras a little more than was expected.

In the lead up to the tournament, fans were warned that they would be required to respect Qatar’s strict, conservative customs.

The Qatar Tourism Authority stated: ‘Visitors (men as well as women) are expected to show respect for local culture by avoiding excessively revealing clothing in public.

‘It is generally recommended for men and women to ensure their shoulders and knees are covered.’

In conservative Qatar, women are banned from wearing any revealing outfits such as tight clothing and from showing any cleavage.

Non-Qatari women are not required to wear the abaya – a long, black robe that covers the figure almost from head-to-toe.

But, tourists are to ensure that tops cover their midriff and shoulders, while skirts, dresses and trousers must hide the knees.

The often glamourous WAGs were advised to wear scarves around their necks to cover up their chests.